Skip to main content
A Pakistani policeman stands guard on the roof of the parliament building on April 6, 2015. ( AFP / FAROOQ NAEEM)


A video has been viewed thousands of times in social media posts in Pakistan that claim the footage shows Information Minister Fawad Chaudhry being expelled from parliament. The claim is false; the video relates to a different politician, opposition party lawmaker Syed Agha Rafiullah, who was briefly ejected from parliament in October 2020.

The video was posted here on Twitter on November 1 and has been viewed more than 15,000 times.

"How the sky changes colour. Deputy Speaker had Fawad dabbu thrown out of the National Assembly. Denied from entering the hall for the entire session," reads the Urdu-language tweet.

"Fawad" refers to Pakistan's Federal Minister for Information and Broadcasting, Fawad Chaudhry, while "dabbu" is an insult meaning "submissive".

The video shows Deputy Speaker of Pakistan's National Assembly Qasim Khan Suri saying in Urdu: "You can't sit here. I'm telling you as the speaker that you should get out of here...he's not allowed to sit in for the whole session."

Chaudhry is briefly seen in the foreground. Screenshot of the post falsely claiming to show Fawad Chaudhry being kicked out of parliament. Taken on November 9, 2021. ( AFP / )

A reverse image search found the same video posted in an article from October 28, 2020 by local media outlet 24 News, which names the man expelled from parliament as Syed Agha Rafiullah, a lawmaker from the Pakistan People's Party (PPP).

Rafiullah can be seen standing in front of the speaker's podium at the 53-second mark.

Below is a screenshot comparing scenes from the video in the misleading posts (left) and the video from 24 News (right): 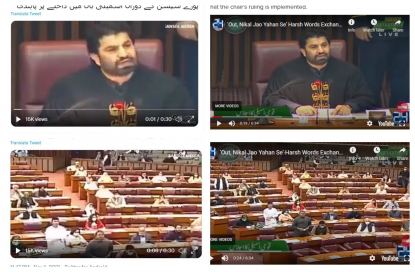 Screenshot comparing scenes from the footage in the false posts (left) and the original from 24 News (right), taken on November 9, 2021

Geo News reported that opposition politicians had accused the deputy speaker of "denying them the mic" before Rafiullah clashed with him.

"After being warned that disobeying the chair could lead to his suspension from the house, Rafiullah left the hall along with other opposition leaders and returned after a few minutes," it said in an article on October 28, 2020.

AFP found no credible reports of Fawad Chaudhry being expelled from parliament.