This is a doctored image of Mount Fuji in Japan

An image showing the figure of a skull in the night sky is circulating in social media posts that claim it shows a drone show in Mexico to celebrate the Day of the Dead. The claim is false; the original photo shows  Mount Fuji in Japan and it has been doctored to include the skull-shaped object.

The picture appears to show lights forming the shape of a skull wearing a sombrero hat in the night sky above a city, with a mountain in the background. 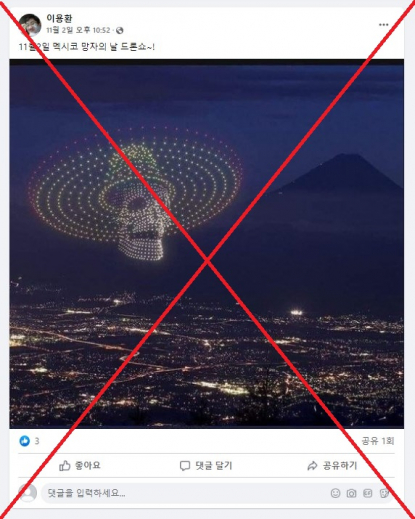 Screenshot of the misleading claim shared on Facebook. Captured November 4, 2021.

The Day of the Dead, which is rooted in indigenous culture, centers around the belief that the souls of the dead return on the night of November 1-2.

Mexicans celebrated the festival in 2021 after cancellations last year due to the pandemic.

The same image was shared in similar Facebook posts here, here and here, as well as on popular South Korean forum Ruliweb here.

However, the posts show a doctored photo.

A reverse image search on Yandex revealed the original photo published on July 20, 2012 in a post on Russian website Artfile.ru. No skull figure can be seen in the photo.

Below is a screenshot comparison of the image shared on Facebook (left) and the original image on Artfile.ru (right):

Screenshot comparison of the image shared on Facebook (L) and the original image on the Russian website Artfile.ru (R)

However, the Russian post incorrectly labelled the photo as being taken in "Monterrey, Mexico."

A photo of a similar view taken atop Amariyama, a nearby peak from Mount Fuji, was posted in this news article on Weathernews Inc., a Japanese weather news company.

A screenshot comparison of the mislabelled Artfile photo (left) and the photo from Weathernews Inc (right), indicates the two photos captured the same landscape. AFP marked corresponding features in the two photos in red, including urban light patterns:

Additional Google searches of the term "Amariyama" and "Mount Fuji" in English and Japanese yielded several other photographs with similar features, including here, here, here and here.

While there were various drone shows across Mexico October to mark the MLB World Series baseball tournement, keyword searches found no credible reports of a drone show to celebrate the Day of the Dead on November 2.