Skip to main content
Afghanistan's captain Mohammad Nabi (L) gestures next to his teammate Mujeeb Ur Rahman during the ICC men’s Twenty20 World Cup cricket match between Afghanistan and Pakistan at the Dubai International Cricket Stadium in Dubai on October 29, 2021. ( AFP / Aamir QURESHI)

A video has been viewed thousands of times on Facebook alongside a claim it shows the Afghan cricket player Mohammad Nabi kissing the flag of Pakistan. The claim is false: an image comparison found that the video shows a TikTok user kissing the flag, not Nabi. The cricketer's management team dismissed the Facebook posts as "rumours".

The clip shows a man kissing the flags of Afghanistan and Pakistan while a song plays in the background. 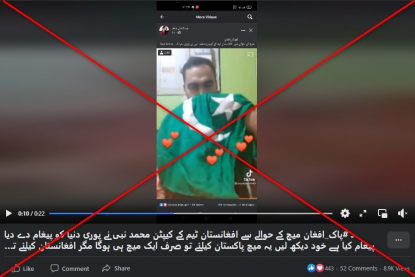 The video's lengthy Urdu-language caption translates in part as: "With reference to the match between Pakistan and Afghanistan, Afghanistan team captain Mohammad Nabi has given a message to the entire world. See for yourself what the message is."

The post circulated online after Pakistan defeated Afghanistan in the Twenty20 World Cup in Dubai. AFP reported on the result here.

The video was shared alongside a similar claim here, here and here on Facebook.

But the man in the video is a TikTok user -- not Nabi.

Keyword searches found the video was posted on TikTok here by a user named @Sharifullah11147.

In the clip, he can be seen picking up the Afghanistan flag and saying in Pashto: "This is my country's flag."

He then picks up the Pakistan flag and says: "I repect this flag like I respect my land's [flag] and my mother."

Below is a screenshot comparison of the TikTok video (L) and the video in the misleading Facebook post (R): 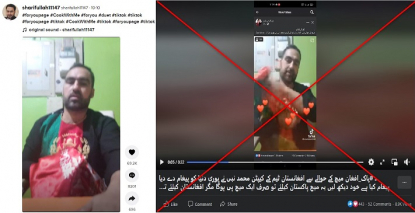 Below is a screenshot comparison of the man speaking in the video (L) and a photo of Nabi from his official Instagram account (R): 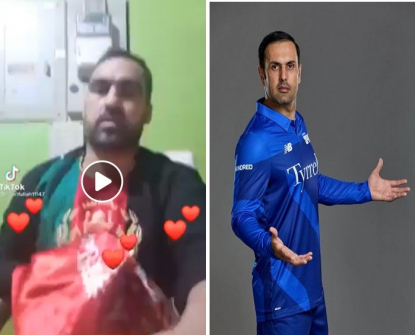 In response to the misleading posts, Nabi's manager told AFP: "He's concentrating on leading his country in the World Cup right now and these rumours are not something he needs to be concerned with".