Following protests in Pakistan by supporters of banned Islamist party Tehreek-e-Labbaik Pakistan (TLP) in October 2021, Facebook posts claimed the European Union passed a resolution recommending sanctions against Pakistan and designating it an extremist country. However, the posts are misleading. The European Union genuinely passed a resolution against Pakistan, but in April, months before the October protests.

"First gift of TLP. Congratulations brothers. European Union has passed a resolution against Pakistan in which it has designated Pakistan an extremist country and recommended sanctions against it," reads an Urdu-language Facebook post from October 30.

"This resolution has been passed in reaction to the recent violent protests against France by TLP".

Pakistan's government outlawed the TLP in April after it staged violent anti-France protests in response to President Emmanuel Macron defending the right of a satirical magazine to republish cartoons depicting the Prophet Mohammed -- an act deemed blasphemous by many Muslims.

Thousands of supporters have been protesting for the release of the group's leader Saad Rizvi, who was arrested in April. 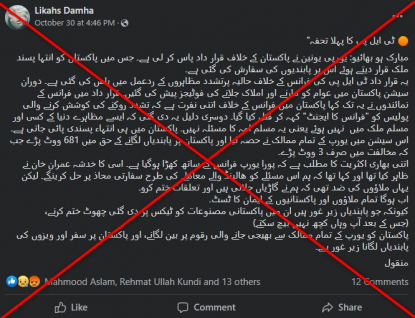 The same text was shared in similar Facebook posts in October here, here and here.

While the European Parliament genuinely adopted a resolution against Pakistan, this was adopted on April 28, and not following violent TLP protests against France in October.

The resolution was entitled: "European Parliament resolution on the blasphemy laws in Pakistan, in particular the case of Shagufta Kausar and Shafqat Emmanuel."

Husband and wife Kausar and Emmanuel were convicted in 2014 for blasphemy and acquitted in June, the United Kingdom’s national broadcaster BBC News reported.

The resolution did not name the TLP, but referred to anti-France protests in Pakistan.

The European Parliament "considers the violent demonstrations and attacks against France unacceptable; is deeply concerned by the anti-French sentiment in Pakistan, which has led French nationals and companies to have to leave the country temporarily," the resolution said.

The resolution also called for the review of trade concessions given to Pakistan under the GSP+ (Generalised Scheme of Preferences) over human rights concerns in the country.

Pakistan's Dawn newspaper covered the EU resolution in a report on April 30.

Similar posts on the EU resolution circulated on social media shortly after its adoption here, here and here.