A video has been shared repeatedly in multiple social media posts that claim it shows two terrorists being arrested in the Indian state of Maharashtra after they attempted to plant a bomb. The claim is false: the video shows a mock drill by the state police in October 2021.

Wada is a town situated in Maharashtra’s Palghar district.

A reverse image search combined with a keyword search found a Marathi-language report by Maharashtra Times published here on October 22, 2021.

The report -- which includes keyframes from the video -- states it shows a mock drill by police officers in Maharashtra, not an actual arrest.

A longer video of the same mock drill was published here on YouTube on October 14, 2021.

The video was filmed at a bus stand in Paratwada -- a city in the Amravati district of Maharashtra -- according to the description.

The eight-minute 16-second video shows police preparing for the drill.

At the five-minute 36-second mark, a policeman can be seen speaking to members of the public about the mock drill.

He says: “Paratwada police have just performed a mock drill to show you how we can tackle a situation if there is a bomb at a public place and people’s lives are in danger… we can avoid casualties if we are already prepared for such situations.”

Below is a comparison of a screenshot of the video in the misleading posts (L) and the YouTube video (R), with similar features highlighted by AFP:

Comparison of the screenshot of the viral video and YouTube video

Further, at 3 minutes in the YouTube video of Vidarbh Prabhat, a structure and a Hindu temple can be seen in the same frame. The same can be spotted on the Google maps here. Temple's name, which is written in the Hindi language, can be read at 7:40 mins in the video. Below is the comparison of the structures seen in the video and a screenshot of the same on Google maps: 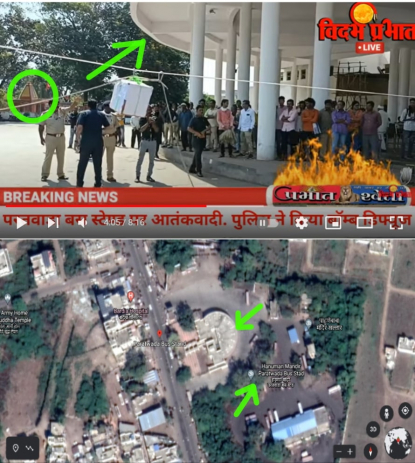 A spokesperson for Amravati police told AFP that the video shows a staged police drill.

“It was just a demonstration that we did last month", he said.

Moreover, there are no recent reports of arresting two terrorists along with bombs in Maharashtra. According to the reports, Delhi police, in the month of September this year, busted a terror module trained by Pakistan's Inter-Services Intelligence (ISI) and apprehended six people, including a resident from Maharashtra.