Skip to main content
Protesters stand outside the parliament in Ouagadougou on October 30, 2014 ( AFP / ISSOUF SANOGO)


Facebook posts shared tens of thousands of times purport to show a photo of a mob in Kenya setting fire to parliament. The claim is false; the photo was taken by an AFP journalist during protests in Burkina Faso in 2014.

"Kenyan citizens set fire to the country's parliament," reads the Sinhala-language text overlay to the photo shared on Facebook on October 16. 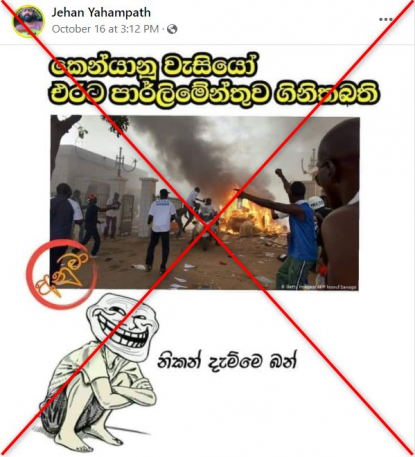 The same photo has been shared more than 40,000 times in similar Facebook posts since at least 2019 here, here and here.

However, the photo was taken in Burkina Faso, not Kenya.

The photo was taken by AFP journalist Issouf Sanogo on October 30, 2014, when hundreds of protesters stormed parliament in the capital Ouagadougou and set it alight. The photo is available in AFP's archives.

The photo caption reads: "Protestors stand outside the parliament in Ouagadougou on October 30, 2014. Hundreds of angry demonstrators in Burkina Faso stormed parliament on October 30 before setting it on fire in protest at plans to change the constitution to allow President Blaise Compaore to extend his 27-year rule."

Mass protests over the bid to extend Compaore's rule forced him to resign.

The Atlantic magazine and ABC News shared the same photo in reports about the protest.