Facebook posts shared thousands of times purport to show a picture of a motorcyclist at a petrol station expressing gratitude to Sri Lankan President Gotabaya Rajapaksa. The image has been doctored. The original photo shows the motorcyclist making an apparently sarcastic gesture of thanks to India's Prime Minister Narendra Modi after a fuel price hike.

The caption reads: "Thank you, sir". 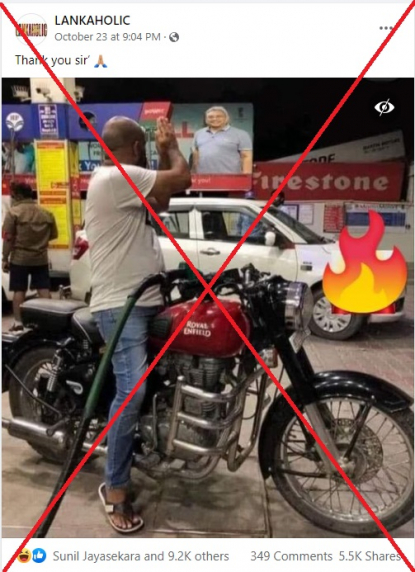 The same image was shared in similar posts here and here.

Another wrote: "If you are still a fan of Rajapaksa, please do yourself a favour and do a DNA test, you cow."

A reverse image search of the photo on Google found this article published on July 20 by Indian news website Gulte headlined, "#ThankYouModiJIChallenge: A Satirical Protest Against Petrol Prices".

Below is a screenshot comparison of the doctored image (left) and the original image (right).

The original image was taken for a satirical photo challenge to protest a fuel price hike, Gulte reported.

"In an unprecedented and sarcastic protest, the vexed up netizens commenced the #ThankYouModiJiChallenge after the consistent petrol price hike in the country," the article reads.

The photo was also featured alongside similar photos posted as part of the #ThankYouModiJiChallenge.