A violent video of a mob pelting stones has been viewed hundreds of times in Facebook posts that claim it was filmed in the Indian city of Jaipur in October 2021. The claim is false; the video corresponds to news reports about a protest in support of Rohingya Muslims in Jammu and Kashmir's Anantnag city in 2017. 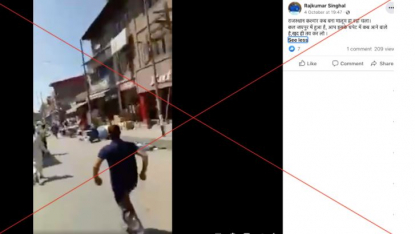 A screenshot of the misleading post taken on November 1, 2021

The video's Hindi-language caption translates to English as: "When did Rajasthan turn into Kashmir, we didn't even realise. This happened yesterday in Jaipur, when are you becoming the victim of this violence, decide for yourself."

Jaipur is the capital of the Indian state of Rajasthan. Anantnag is a city in the Himalayan state of Jammu and Kashmir.

The video was also viewed hundreds of times alongside a similar claim on Facebook here and here.

It has circulated online with the same claim since 2017 here and here on Facebook.

AFP found the video corresponds to footage aired by the ANI television news agency on September 8, 2017.

The ANI report states: "At least six police personnel got injured amid the protest in Jammu and Kashmir's Anantnag district, against the genocide of Rohingya Muslims in Myanmar."

Below is a screenshot comparison of the video in the misleading posts (L) and corresponding footage from the ANI report (R).

Shop names seen in the video correspond to online photos of establishments in Anantnag city.

For example the "Vasco Pasco" signboard at the video's 24-second mark matches this photo; and the adjacent "Western Hosiery" and "Sathoo Furnishing" at the one-minute and 17-second mark to this photo.

Below are screenshot comparisons of shops seen in the video (L) and corresponding photos of shops in Anantnag (R).

A comparison of the "Vasco Pasco" signboard

A comparison of the "Western Hosiery" signboard