This photo shows Pakistan's foreign minister at a 2017 Islamist rally

Following protests in Pakistan by banned Islamist party Tehreek-e-Labbaik Pakistan (TLP) in October 2021, a photo began circulating on Facebook and Twitter alongside a claim it shows Pakistan Foreign Minister Shah Mahmood Qureshi attending one of the group's recent rallies. The photo has been shared in a misleading context: it shows Qureshi at a 2017 Islamist rally, the year before his party came to power in Pakistan.

The photo appears to show Qureshi sitting in the middle of a crowd of people, some of whom are holding green flags. The colour green is traditionally associated with Islam.

The TLP staged major anti-France protests in Pakistan in April, 2021, after President Emmanuel Macron defended the right of a satirical magazine to republish cartoons depicting the Prophet Mohammed -- an act deemed blasphemous by many Muslims.

The group was then outlawed by the government and has recently protested against the detention of its leader, AFP reported.

One wrote in Urdu: “He’s out on the government’s orders so that the public’s attention is diverted from rising prices to this.”

The photo has been shared alongside a similar claim here on Twitter; and here, here, here and here on Facebook.

A reverse image search found the photo was posted to an unverified Twitter account that promotes Qureshi here on November 26, 2017 -- the year before his party, the Pakistan Tehreek-e-Insaf (PTI), came to power.

The tweet's Urdu-language caption reads: "Makhdoom Shah Mehmood Qureshi participates in the finality of the Prophethood rally at Chowk Ghanta Ghar in Multan."

The "finality of the Prophethood" refers to a key tenet of Islam in Pakistan, specified in the country's constitution, which asserts that no other prophets came after the Prophet Mohammed.

Below is a screenshot comparison of the photo in the misleading posts (L) and the image published in 2017 (R):

A further search in the archive of the local Multan newspaper Khabrain found a similar image published in the e-paper edition on November 27, 2017.

It shows Qureshi in the same crowd.

The photo's caption states Qureshi was "participating in a sit-in". 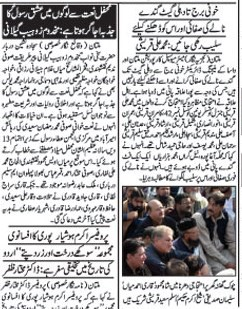 In November 2017, Islamist groups protested nationwide against a proposed change to the oath taken by election candidates that was deemed to threaten the finality of the Prophethood. The TLP was at the forefront of those protests.

In 2017, the interests of Qureshi's PTI party were aligned with the TLP as a way to split the voter base of the then-ruling party.

However, the parties have since diverged, with the PTI government banning the TLP under anti-terrorism laws and detaining its leader.