This picture of Chinese astronauts having lunch has been doctored

After three astronauts successfully docked with China's new space station on October 16 on what is set to be Beijing's longest crewed mission to date, an image surfaced in social media posts purporting to show the crew members enjoying a barbeque on board. The image has been doctored; the original photo shows the astronauts eating compact space food for lunch.

"The CCP creates the world's first BBQ in the spaceship," reads a Chinese-language Facebook post published on October 26.

The post purports to show a picture of three astronauts grilling skewers. 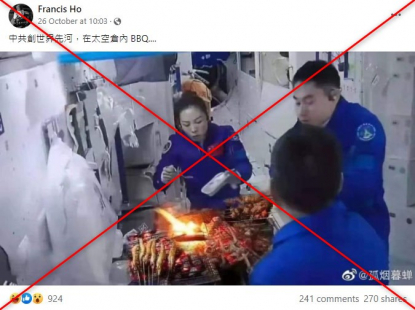 The Shenzhou-13 vessel carrying the three astronauts completed its docking on October 16, with the team expected to spend six months at the Tiangong space station.

One person commented: "Great, our country is now able to accomplish anti-gravity status!"

"Wait! They're starting fires in the spaceship?" another wrote.

However, the image has been doctored from a photo that shows the three astronauts eating space food.

A reverse image search on Google found the same picture -- but without the barbeque -- published in a news report by Chinese state media Chinese Central Television (CCTV) on October 18. The image shared online can be seen at the 0:48 time stamp. 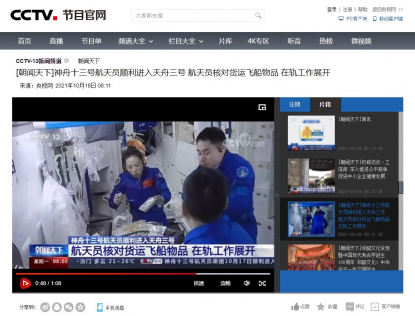 "The astronauts are having lunch at 12 noon," the news anchor said in Mandarin.

Space food and drink are packaged primarily in zip lock bags, retort pouches and cans due to their lightweight, compact size and airtight seals, to prevent spoilage and spillage. Food is prepared using microwaves and convection ovens.

Below is a screenshot comparison of the doctored photo (left) and the original footage (right).

The same scene of the crew members having lunch was also reported by Chinese state-owned agency Chinese News Service.