There will not be a blue moon on Halloween 2021

Facebook posts claim that a blue moon will appear on Halloween, October 31, 2021. Although this phenomenon did happen in 2020, it will not this year, according to the US space agency NASA and the Farmers' Almanac. 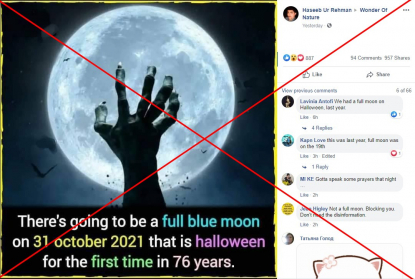 Other examples of the inaccurate claim appeared on Instagram here and here.

A blue moon was visible the night of Halloween in 2020, but it is not an astrological event that occurs every year. On average there will be a blue moon every two and a half years, according to NASA.

NASA offers a full moon guide that includes a tool allowing you to see the phases of the moon and the days on which they occur. It shows that on October 31, 2021 a waning crescent moon will be visible in the night sky. 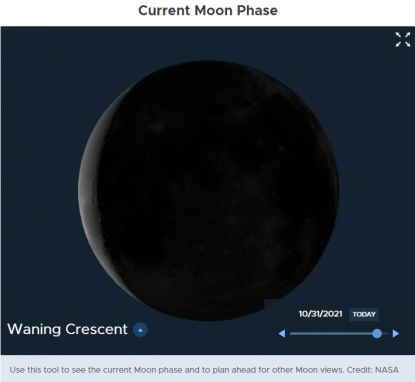 Screenshot taken on October 28, 2021 of the NASA moon guide

The Farmers' Almanac calendar also shows that a full moon rose October 20, 2021 and that there is no secondary blue moon scheduled. This year did see a rare seasonal blue moon -- also known as a Sturgeon moon -- on August 20.

AFP has debunked other inaccurate claims regarding space and astrological events here.