A quote attributed to David Attenborough that claims black ants and red ants will kill each other if you shake them in a jar has been shared tens of thousands of times on social media. The claims are false: the quote has been misattributed to the famed naturalist and broadcaster, Attenborough's spokesperson told AFP. Experts also told AFP that ants of different species will act aggressively towards each other even in an unshaken jar.

The claims were shared here by a New Zealand-based user. The post has been shared more than 150 times. 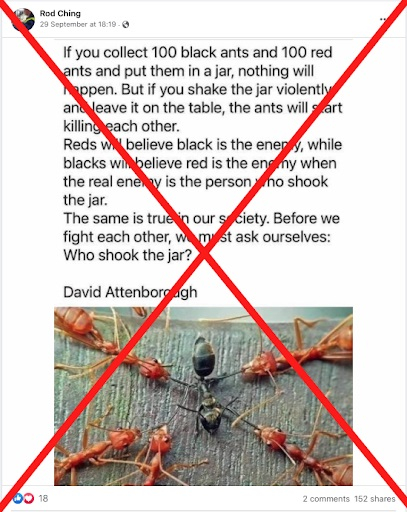 The post includes an image of five red ants appearing to pull a black ant apart. A statement attributed to David Attenborough is superimposed above the image.

The text reads: “If you collect 100 black ants and 100 red ants and put them in a jar, nothing will happen. But if you shake the jar violently and leave it on the table, the ants will start killing each other.

The text has been shared tens of thousands of times alongside a claim it came from Attenborough, for example here, here and here.

However, the claim is false, according to Attenborough's lawyer, Michael Ridley.

He told AFP in an email that Attenbourgh “categorically denies ever having made any such statement”.

Multiple experts also explained that the scenario described in the posts is inaccurate.

Entomologist from James Cook University, Associate Professor Lori Lach, told AFP that regardless of whether you shake a jar containing two species of ants, they will likely be aggressive toward each other.

“The level of aggression will vary with species (there are over 15,000 named ant species, so there would be variation), how frequent the contact is, and how long they have been separated from the rest of their colony, but it’s highly unlikely that "nothing would happen"," she explained.

“We would also expect to see aggressive behaviour with ants of the same species from two different colonies. Even though they look identical to us, the ants can "smell" outsiders,” Loch said on October 28, 2021.

Professor of Entomology from University of California Davis, Philip S. Ward, told AFP the post “sounds dubious” and said that he was not aware of experiments pitting black ants and fire ants against each other in a jar.

“If you place ants of different species in a jar, they will generally behave aggressively to individuals of the opposite species, regardless of whether the jar is shaken or not,” Ward told AFP on October 23, 2021.

“This behaviour is mediated by smell: ants of different species, and even those from different nests of the same species, present a different "bouquet" of odours, and ant workers usually behave aggressively to those who smell different,” he said.