A photo has been shared in multiple Facebook and Twitter posts that claim it shows a "famous Italian singer selling her bra to a crowd in 1955". The claim is false: the photo shows Hollywood actress Katie Holmes reenacting a protest scene for a magazine feature in 2018.

The post's Urdu-language caption translates as: "In 1955, famous Italian singer (Julia Markin) stood on a raised platform in the city, took off her brassiere and asked people; "How much?" The peoples' answers ranged between eight dollars and three thousand dollars!

"In the end, she laughed and said, "How dumb you people are, who'd spend so much on a trivial cloth for your sexual desires. But you can't fill the stomach of one poor person. I'm very ashamed and sad over your humanity"." 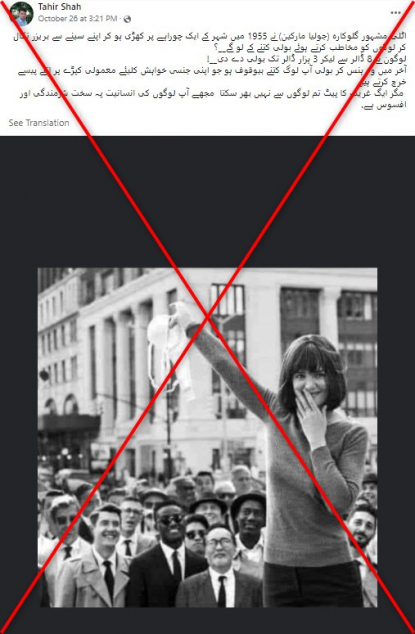 The claim is false. The photo shows actress Katie Holmes posing for a magazine feature.

"Roxane Gay reflects on the current resistance and its roots in the women's liberation movement, as re-created here by Katie Holmes," the magazine article reads.

Below is a screenshot comparison of the photo in the misleading posts (L) and the original from Harper's Bazaar (R): 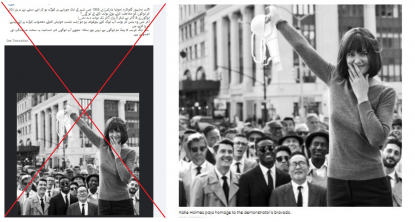 A spokesperson for the magazine told AFP the photo "is from a photoshoot in the Dec 2018/Jan 2019 issue of Harper's Bazaar US".

"Katie Holmes was [reenacting] an image of a protester outside a San Francisco department store, 1969," the spokesperson said.