Skip to main content
A fruit vendor selling bananas displayed on a car waits for customers along a roadside in Amritsar on August 21, 2021. ( AFP / NARINDER NANU)

Multiple Facebook posts claim that if a banana has a green stalk, it indicates the fruit has ripened "naturally", while a yellow stalk shows it was "ripened using chemicals". The claim is misleading: the colour of a banana's stalk does not indicate whether it ripened naturally or with chemicals, experts say.

"When you buy bananas from the market, make sure you pay attention to this," reads a Facebook post shared on October 14, 2021.

"The banana stalk of fruits naturally ripened will be green," the post claims. "Even the stalk of bananas ripened using chemicals will be yellow." 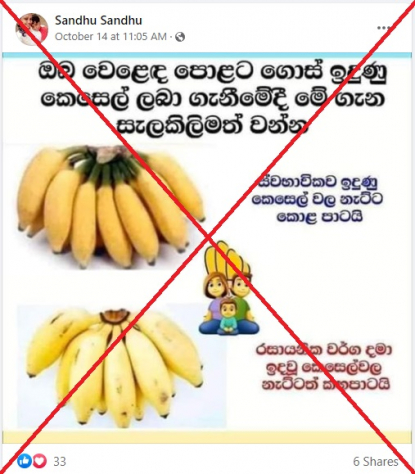 A similar claim has circulated in Facebook posts since at least 2020, as seen here, here and here.

"The use of chemicals in the ripening process of bananas cannot be judged through the colour of their stalk," Ilmi Hewajulige, director of Sri Lanka's Industrial Technology Institute, told AFP on October 27.

"There is a stage in the natural ripening process of bananas as well where the entire fruit will be yellow."

Conversely, bananas that have been ripened using chemicals could have green stalks, she said.

"Among the most commonly used chemicals to ripen fruit, is ethylene. During the ripening process, if only the fruit was exposed to the chemical, the stalk would remain green despite the use of chemicals," she said.

There is no visible difference between bananas that ripen chemically or naturally,  according to Dr K H Sarananda, senior lecturer at the Wayamba University Department of Biosystems Engineering.

Application of ethylene to induce ripening "does not have any detrimental impacts to human health," he said. "Any chemically ripened fruit -- including bananas -- would begin to show discernible markers only if there were irregularities in administering the chemicals.

"Bananas ripened using a banned substance such as calcium carbide would emit a foul odor. Such fruits are banned from being released to the markets."

Similar misleading claims about banana stalk colour previously circulated in Australia, as debunked by the Australian Associated Press in 2019.