Social media posts claim untapped oil reserves in an area of the US and Canada exceed those in Saudi Arabia and other major oil-producing nations. This is false; official US government estimates for the Williston Basin region -- where drilling has occurred for years -- are 5.8 billion barrels, compared with an estimated 267 billion for Saudi Arabia alone.

"THIS WILL BLOW YOUR MIND FOLKS!!!!!!" says an October 21, 2021 Facebook post, claiming the US Energy Information Agency (EIA) estimates crude in Williston Basin's Bakken Formation at "503 billion barrels. Even if just 10% of the oil is recoverable (5Billion barrels), at $107 a barrel, We're looking at a resource base worth more than $5.3 trillion." 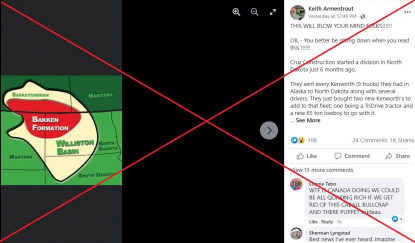 Similar posts appeared on Facebook, recirculating  a claim that has spread online before. It resurfaced as US politicians debated efforts to cut fossil fuel use to fight climate change, and during a spike in US energy costs.

But US government officials say that while the Williston and Bakken fields in North Dakota, South Dakota, Montana and a portion of Canada -- where oil drilling has been active for the past decade -- have significant reserves, they are nowhere near the levels suggested in these posts.

Alex Demas, a spokesperson for the US Geological Survey (USGS), said similar false claims were made in a "viral email back in 2008 that made the rounds quite a bit."

The most recent USGS assessment of the whole Williston Basin is available here.

Even with optimistic estimates, the United States is far behind other countries in oil reserves, even if it did become the largest oil producer in 2018, a distinction it still holds, according to EIA.

A ranking of the top countries for oil reserves by the industry publication NS Energy showed the United States in ninth place, with Venezuela and Saudi Arabia at the top. The list was based on a report by the energy firm BP.

Kenneth Medlock III,  senior director at Rice University's Center for Energy Studies, said oil potential can be measured in terms of "reserves" that are identified and recoverable with current technology, and "resources," which may be in the ground.

"Nothing is a reserve until it can be demonstrated and produced as commercially viable in a reasonable time," Medlock said, adding that he has seen no data showing anything in the Williston fields that would compare with Saudi Arabia using "an apples to apples comparison."

"Quite frankly, the Saudi resource base is massive," he said.