Skip to main content
Pedestrians walk across a road in Seoul on October 26, 2021 ( AFP / Anthony WALLACE)

Social media posts circulating in South Korea claim Seoul city hall has planned to invest "zero" cash in measures to improve gender equality in its 2022 budget. The posts are misleading; a spokesman for the city hall said the budget, set to be submitted in November, would allocate funds to support gender equality and development.

The claim was shared here on Facebook on October 25.

The claim was shared alongside a screenshot of a tweet that reads: "We won't be able to continue our work since Seoul city has allocated no budget for the 'gender equality sector' next year. / Eunpyeong Sisters."

Eunpyeong Sisters is a civic group that supports women who live alone in Seoul's Eunpyeong district. 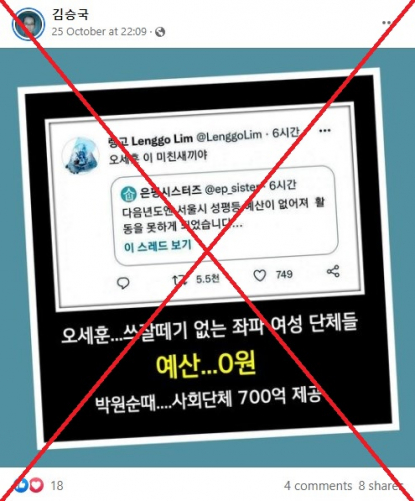 Similar posts were shared on Facebook here and here.

A spokesman for Seoul city hall said the 2022 budget -- which is to be submitted for review by city authorities on November 1 -- would include funds to support gender equality projects.

"The city plans to continue various activities and projects to support gender equality and development, and also such a budget will be included in the 2022's plan," he told AFP.

Eunpyeong Sisters later said its tweet was misleading and that the group was referring to a specific project called "Gender Governance Project" rather than the city's budget plan.

The Seoul city hall spokesman said the "Seoul Acceleration Center For Gender Equity" was running a similar project, and it will increase the budget for the centre after it scrapped the project cited by Eunpyeong Sisters.