This video was filmed in the Turkish city of Istanbul, not London

A video has been viewed thousands of times in multiple Facebook and Twitter posts that claim it shows a Muslim man praying in the middle of a busy road in London. The posts -- shared in the Hindu-majority nation of India -- misleadingly claim the clip shows the city is "in the clutches of Islam". The claims are false: the video was actually filmed in the Turkish city of Istanbul.

The video was shared here on Facebook on October 2, 2021.

The post's Hindi-language caption translates in part as: "Britain is in the grip of Islam. London -- which ruled half the world just 75 years ago -- is now trapped in the clutches of Islam.

"Due to their excessive generosity towards Islam, Britain today has 89 Muslim mayors and about 40/50 Muslim MPs, that's why they can do whatever they want to. A lone Mullah is performing Namaz fearlessly on a crowded road in London. In another sense, showing the power of Islam."

The post continues: "Watch a one-minute 12-second video of a lone Muslim performing Namaz on a busy road in London."

Namaz refers to the Islamic worship or prayer observed by Muslims. 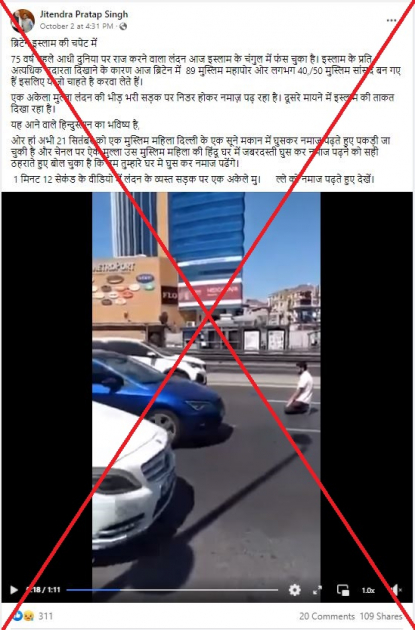 The video has been shared alongside a similar claim on Facebook here, here and here; and on Twitter here and here.

However, the claim is false. The video was actually taken on a highway in Istanbul, Turkey.

A reverse image search followed by keyword searches found the video published in a report from September 19, 2021, by Turkish news site T24.

The Turkish-language headline of the article reads: "He prayed in the middle of the road in Istanbul; 'The qiblah is wrong'".

Qiblah is an Arabic expression referring to the direction of the Sacred Mosque in Mecca, Saudi Arabia.

Muslims turn towards it when they pray.

The report's first line reads: "A person began to pray on the Istanbul E-5 highway, ignoring vehicles passing by."

The Turkish-language report is titled: "The 'wrong qiblah' reaction to a provocateur who prayed in the middle of the road in Istanbul".

AFP found the video corresponds to Google Street View imagery of the E-5 highway in Istanbul here, across from Metroport Mall.