The images feature sand castles created by an artist, not natural formations

Facebook posts shared hundreds of times show photos of a structure on a beach, which they claim are fulgurites created "when lightning strikes sand". The posts are misleading; the pictures show elaborate sand castles made by an artist. 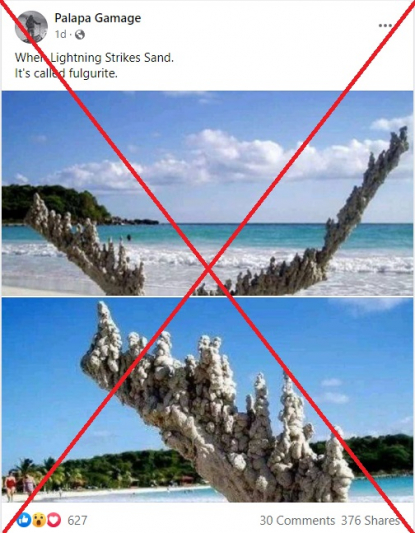 Screenshot of the misleading claim shared on Facebook, taken on October 26, 2021

The same images were shared in similar Facebook posts here and here.

Fulgurites are natural formations consisting almost entirely of silicon dioxide, or silica, and are created when lightning strikes damp sand.

A reverse image search of the photos on Google led to this Flickr photostream by academic and artist Matthew Kaliner, who goes by the username "sandcastlematt".

The two photos shared in misleading posts were published on January 26, 2007 here and here.

A caption on one of the photo reads, "The biggest sand castle I've ever made... or maybe not".

The caption on the second photo reads, "Tried to make an 'open face' sand castle, I suppose. I don't think it worked out so well, and that glaring sun on the white sand didn't really help the photo. Still, who can complain about spending a couple hours messing around on that beautiful beach?"

Kaliner's sand castles featured in a 2015 article by WBUR radio station, where he said the sculptures were made from driftwood, string and sand dripped onto elaborate architectures of sticks.

"The principle is you use anything you find on the beach," he told WBUR.

"One time this lady came up to me and said, 'I have a Ph.D. in physics and I don’t know how you did that.'"

Below is a screenshot comparison of the photos in the misleading posts (left) and the photos on Kaliner's Flickr (right). 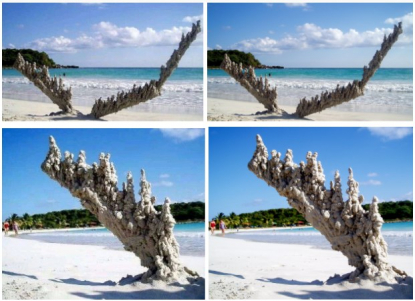