Multiple Facebook posts shared repeatedly in October 2021 claim more than 500,000 South Korean national honourees -- people who have made a sacrifice or contribution to the country -- are from one province. The posts also claim that national honourees make up 60 to 70 percent of the country's public servants. The claims are false: the numbers cited by the posts exceed the official government data. 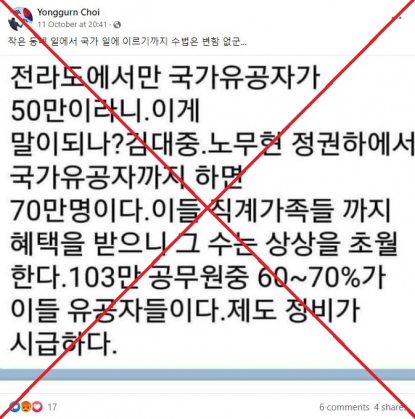 Part of the Korean-language claim translates to English as: "There are 500,000 national honorees from Jeolla province only. Does this make sense? It would be 700,000 when including those from Kim Dae-jung and Roh Moo-hyun administrations.

The term "national honourees" -- also known as persons of distinguished service to the state -- refers to those who have made a sacrifice or contribution to the Republic of Korea.

National honourees and their family members are entitled to veterans benefits, under South Korean law here.

The claim appears to be designed to undermine the current administration, which is much favoured by people from Jeolla Province, by hinting that the government doled out honouree positions to people there in exchange for the support.

As of September, 60,176 national honourees and their family members were situated in Jeolla province, according to the latest data released by the Ministry of Patriots and Veterans Affairs (MPVA) on October 8, 2021.

Even after adding the numbers of national honourees from Jeolla recorded by previous South Korean administrations, the figure is still well below 700,000.

There are about 1.13 million public servants in South Korea in 2020, according to data from the Ministry of Interior and Safety.

The claim in the misleading posts suggests 679,000 of them (60 percent) are national honourees.

However, data from Statistics Korea show that only 119,701 national honourees received employment benefits in 2020 -- meaning they worked for both public and private institutions.