A photo of a street covered in fish is circulating in reports about a town in Honduras where the sky "rains fish", a baffling phenomenon where heavy downpours leave hundreds of fish scattered on the ground. The photo has been shared in a misleading context; it was taken after the door of a truck carrying fish accidentally opened in Guizhou, China in 2015.

The post shows a photo of hundreds of fish scattered across a road.

It links to a news article about a community in Yoro, Honduras, where heavy downpours leave hundreds of fish on the ground in a phenomenon touted by locals as a blessing from God. 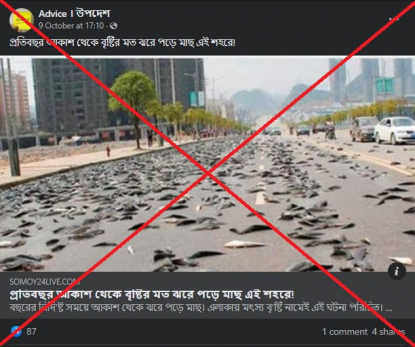 The same photo was shared in similar reports here and here.

A reverse image search on Google found the photo was published in reports from 2015 about fish left scattered across the road after a truck accident in China's Guizhou province. 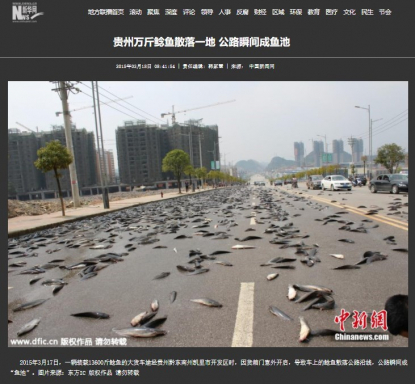 Screenshot of photo in Xinhua report

A TV news report from Chinese state broadcaster CCTV showed police redirecting traffic after the mishap and firefighters using water pressure from hosepipes to gather the fish together.

"After more than two hours of efforts, more than five tonnes of fish scattered from the vehicle were all back on the truck," the reporter said.

Locals in and around the town of Yoro in Honduras claim it has "rained fish" for generations.

While explanations for the phenomenon vary, one theory is that heavy rain flushes out fish living in subterranean streams or caverns, which are left stranded when the downpour recedes, The New York Times reported.

"It happens every year — at least once and often more, residents say," it said. "Once the storm clears, the villagers grab buckets and baskets and head down the road to a sunken pasture where the ground will be covered in hundreds of small, silver-colored fish".

"Some residents attribute the occurrence to the prayers of Manuel de Jesús Subirana, a Catholic missionary from Spain who in the mid-1800s, asked God to help ease the Yoro region’s hunger and poverty. Soon after he issued his plea, the legend goes, the fish rain began."

"Nobody has actually seen a fish fall from the sky, but residents say that is only because nobody dares leave home during the kinds of powerful storms that bring the fish."