Skip to main content
Philippine Vice President Leni Robredo gestures to a crowd of people supporting her candidacy to join the 2022 presidential race outside the Cultural Center of the Philippines in Pasay, Metro Manila, on October 7, 2021. ( AFP / Jam Sta Rosa)

A video circulating on YouTube and Facebook claims an official of the Philippine Commission on Elections (Comelec) "confirmed Vice President Leni Robredo violated election rules" and will be disqualified from running in the 2022 presidential race. This claim is false. The video misrepresents remarks made by the Comelec official about campaign donations. A spokesman for the commission separately said claims about Robredo's purported disqualification in October 2021 were "fake news".

The video has been viewed more than 245,000 times since it was posted on YouTube on October 17.

Its Tagalog-language title translates as: "JUST IN: COMELEC CONFIRMS ROBREDO WILL BE DISQUALIFIED AFTER SOLICITING MONEY, YOU'RE IN TROUBLE!"

The video's thumbnail shows a photo of Robredo alongside a picture of Comelec Commissioner Rowena Guanzon.

"According to Commissioner Guanzon, the campaign period hasn't even started yet but Vice President Robredo's camp has already committed violations," the video's voiceover says. 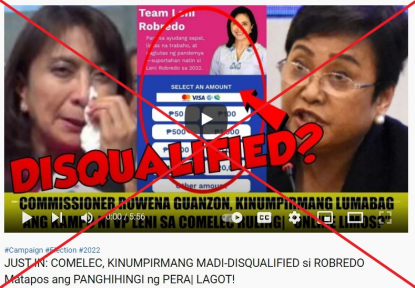 Robredo, a staunch critic of President Rodrigo Duterte and his deadly campaign against drugs, announced her presidential bid on October 7.

The video surfaced after supporters of Robredo launched a fundraising page to support her bid for the 2022 presidential election.

Responding to a report about the fundraising, Guanzon tweeted: "Foreigners cannot contribute to any Filipino candidate".

The posts appeared to have misled some social media users.

"Very good that she got DISQUALIFIED. She's showing that she's not following Comelec's rules and regulations. She doesn't deserve to be the President," one commented.

But the claim in the video is false.

"I did not say VP Robredo violated any law or COMELEC rule when her supporters did a fundraising for her campaign. Any Filipino can donate to a candidate, but foreigners are prohibited by law," Guanzon told AFP on October 25.

Guanzon's tweet on October 13 does not indicate she "confirmed" any election violation purportedly committed by Robredo, as the video alleges.

"VP Leni Robredo has not been disqualified. Video and articles that imply or suggest otherwise are #fakenews," he tweeted on October 17.

"COMELEC's reminders on prohibited sources of funding apply to all would-be candidates," he added.

VP Leni Robredo has not been disqualified. Video and articles that imply or suggest otherwise are #fakenews. COMELEC's reminders on prohibited sources of funding apply to all would-be candidates. #fightfake

Jimenez said there were various rules around giving money to political candidates.

"For contributions, the true name of the contributor is required. But the contributor must not be among those prohibited under Sec. 95 and 96 [of the Omnibus Election Code]," he told AFP.

Sections 95 and 96 of the Omnibus Election Code (OEC) only prohibits political candidates from receiving donations from some individuals and groups, such as foreigners, civil service employees, members of the armed forces, financial institutions and foreign governments.

Comelec said it would study the need to release regulations for crowdfunding campaigns, ABS-CBN reported.