A video has been viewed hundreds of thousands of times in multiple social media posts that claim it shows indigenous Australians defending themselves with bows and arrows against compulsory Covid-19 vaccinations. The claim is false: the video predates the pandemic. It shows indigenous groups in Brazil protesting in 2019 against a proposal to transfer indigenous health services from the federal government to municipalities. Covid-19 vaccination is only compulsory at a national level for certain key workers in Australia, as of October 27, 2021.

The video was published here on Twitter on October 19, 2021. 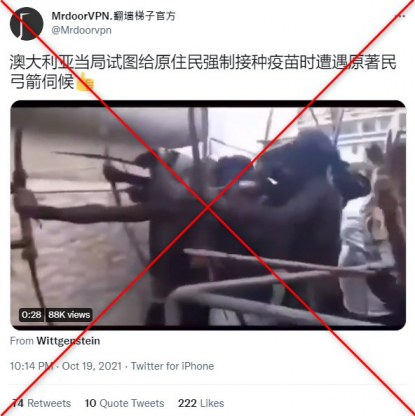 The video shows a group of people pointing bows and arrows at police officers.

"The Australian authorities tried to enforce compulsory vaccinations on indigenous Aussies and were attacked by bows and arrows," the post's simplified-Chinese caption reads.

In fact, Covid-19 vaccination in Australia is only compulsory for certain key workers nationally, according to the Australian Department of Health. Some states have introduced their own jab requirements for other specific groups, including teachers and construction workers.

Despite this, some social media users appeared to believe the claim.

One person wrote: "These indigenous people defended themselves with common sense, while those who believe in science use scientific vaccines to protect themselves."

Another said: "What on earth possessed the authorities with this coercion? The native inhabitants have survived much greater challenges than Covid-19."

However, the claim is false: the video predates the Covid-19 pandemic and was filmed in Brazil.

A keyword search on Google found the video was published here on Twitter by a journalist from Telesur, a Latin American television network, on March 29, 2019. 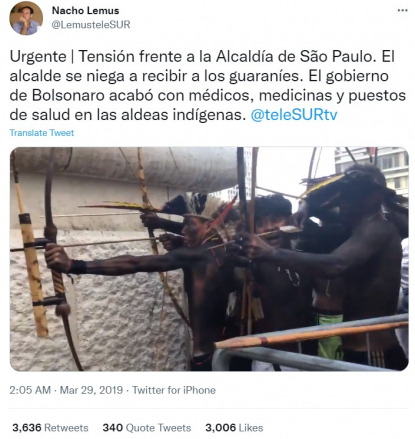 "Urgent | Tension in front of the São Paulo Mayor's Office. The mayor refuses to receive the Guarani. The Bolsonaro government wiped out doctors, medicines and health posts in indigenous villages," the post's Spanish-language caption reads.

Below is a screenshot comparison of the video in the misleading post (L) and the video published on Twitter (R): 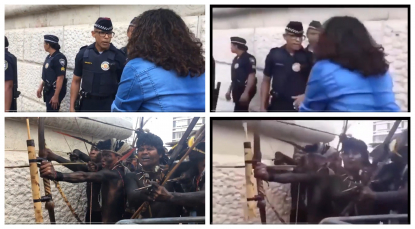 Indigenous organisations in Brazil demonstrated at São Paulo city hall in March 2019 against a proposal to shift indigenous health care services from the federal government to municipalities, according to a report from the Associated Press here.