Skip to main content
A health worker administers the Pfizer vaccine for the Covid-19 coronavirus to a high school student at Prachaniwet Secondary School in Bangkok on October 4, 2021. ( AFP / LILLIAN SUWANRUMPHA)

A video viewed hundreds of thousands of times in multiple posts on Facebook, YouTube and Twitter claims that the oral anti-viral drug molnupiravir can "cure" Covid-19, rendering vaccines pointless. The claim is misleading: although clinical trials indicate molnuprivir could be an effective treatment for Covid-19, it has not been approved by national or international health authorities for use as of October 25, 2021. Health experts have warned the drug should not be considered a replacement for Covid-19 vaccines.

"Game over for Covid-19. A German drug, molnupiravir cures Covid-19 after 24 hours after taking it orally. People will stop using Covid-19 vaccines," read this Thai-language Facebook post on June 4, 2021. 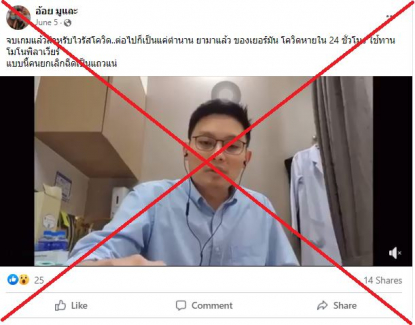 The post includes a three-minute video of a purported doctor talking to a camera.

The clip was taken from this longer YouTube video, posted in April 2021.

It is titled: "Molnupiravir, our new hope. A game-changing drug."

The full YouTube video has been viewed more than 480,000 times.

It was published on the YouTube channel called "Dr. V Channel".

The YouTube channel has a corresponding Facebook page with more than 101,000 followers. It is titled: "Dr Veerapan specialist in brain and neurology".

At the YouTube video's five-minute 22-second mark, it shows a screenshot of an article featured on the website Healthworld.com, part of India's Economic Times newspaper.

In the misleading clip, the purported doctor references parts of the article. He says: "The pill could be a game-changer for Covid-19. It is called molnupiravir, produced by Merck, a German company. It is an oral pill. After the patient took the pill, it completely suppresses the virus transmission within 24 hours."

'Not a substitute for vaccines'

Scientists say the results of initial studies examining molnupiravir's effectiveness in treating coronavirus have been encouraging.

On October 11, 2021, Merck applied for emergency use authorisation of molnupiravir in the United States, AFP reported.

But the pharmaceutical giant does not claim the drug can eradicate Covid-19 or that it could be a substitute for approved vaccines.

Dr Thiravat Hemachudha, the head of the Emerging Infectious Diseases Health Science Centre at Chulalongkorn University, told AFP: "People should get vaccinated with Covid-19 vaccines. This would reduce the number of people infected, those with critical conditions and the transmission rate from person to person.

"Instead, molnupiravir should be used only when you have already infected Covid-19."

Professor Peter Hotez, Texas Children's Hospital Dean, said the capsule was "not a miracle cure" and "not a substitute for vaccination" in a Twitter thread on October 1.

5/5 Finally there’s access. Unlike mRNA vaccines which can take years to learn how to produce at scale under a quality umbrella, like ARTs this one is far more straightforward. Likely Cipla or equivalent can make it now. I believe Merck & Co discussing tiered pricing.

The misleading video referenced this Healthworld.com article published on December 6, 2020.

It states a study by America's Georgia State University looked at the effectiveness of treating ferrets -- not humans -- with molnupiravir.

The article reads: "If these ferret-based data translate to humans, Covid-19 patients treated with the drug could become non-infectious within 24 hours after the beginning of treatment".

The same paragraph of text is included in an article published by Georgia State University on December 3, 2020.

The university article quotes Dr Robert Cox -- one of the study's authors -- on why ferrets were used.

“We believe ferrets are a relevant transmission model because they readily spread SARS-CoV-2, but mostly do not develop severe disease, which closely resembles SARS-CoV-2 spread in young adults,” the article quotes him as saying.

Dr Thiravat said: "Ferrets are often used as a representative of humans with it comes to Covid-19 studies. However, this was still a preliminary phase."