Skip to main content
A picture taken on May 17, 2021 shows a general view of the Chateau de Versailles (Palace of Versailles), the site of the 1789 Estates General ( AFP / Martin Bureau)

Political terms left and right come from France, not Bible


Social media posts suggest a Biblical quote is the origin of the political terms left and right. This is false; historians and researchers say the distinction arose in the constituent assembly in France in 1789, when a seating plan placed conservatives and progressives on opposite sides.

"I've always wondered why liberals were referred to as the Left and conservatives the Right," says the September 26, 2021 Facebook post. "Then I found this Bible verse.. The heart of the wise inclines to the right, but the heart of the fool to the left." The quote is from Ecclesiastes 10:2. 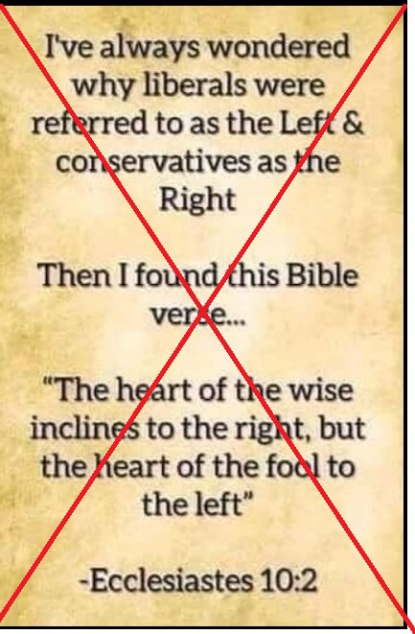 While the Bible quotation is accurate, historians say it has no bearing on modern politics. The political classification of left and right originated at the time of the French Revolution, with the Estates General (which evolved into the National Assembly) devising a seating arrangement to make it easier to count the large numbers of votes.

"The 'right-left' political spectrum first appeared in the French Revolution, when proponents of change clustered to the left of the presiding officer and those opposed on his right," said Rebecca L. Spang, a history professor and director of the Indiana University Center for Eighteenth-Century Studies, who makes this point in her book, "Stuff and Money in the Time of the French Revolution."

David Bell,  who is the Sidney and Ruth Lapidus Professor in the Era of North Atlantic Revolutions  at Princeton University and has extensively researched the French revolution, agreed, calling it  "a very well-known uncontrovertible fact," while noting that modern political systems were not established at the time of Biblical writings.

"The first assembly following the French Revolution ended up with the conservatives on the right.. the terminology has stuck to the present day," Bell said.

"The idea that this came from Ecclesiastes is just silly," Bell added.

Bell and others said the right-left positions were determined haphazardly and that the opposite could have occurred.

Dutch researchers Frits Bienfait and Walter E. A. van Beek of Tilburg University  wrote in a 2014 paper  in the Journal of Social and Political Psychology that the determination of right and left was "accidental."

"Given the large number of representatives (more than 500), a vote by roll call would have taken a long time, and so it was decided, apparently in the hope that there would be a clear majority for one side or the other, that (Count) Mirabeau's supporters would congregate to the left of the president of the sitting and (Baron) Malouet's supporters to the right," the researchers wrote.

Citing British researcher W.G. Runciman's prior writings, they say the seating arrangement "was an accidental choice and it could easily have been the other way around."

"In the sittings that followed, this division continued to be reflected in the way the representatives took their seats in the chamber. Those that adhered most to the ideals of the Revolution increasingly grouped themselves to the left of the president, while the supporters of the Ancien Régime congregated more to the right."