This video has circulated in reports about a fire at a Hindu temple in India, not Bangladesh

A video of a building engulfed in flames has been viewed thousands of times on Facebook alongside a claim it shows an attack on Hindu houses and temples in Bangladesh's northern district of Rangpur. The posts circulated online after Bangladesh witnessed a wave of violence targeting religious minorities. But the video has been shared in a misleading context: it previously circulated in news reports about a fire at a Hindu temple in India’s Tripura region.

The video was shared here on Facebook on October 18, 2021. It was shared more than 240 times before it was removed.

The post circulated online following furore in Bangladesh over the desecration of the Koran during a Hindu religious festival. AFP reported on the subsequent unrest here. 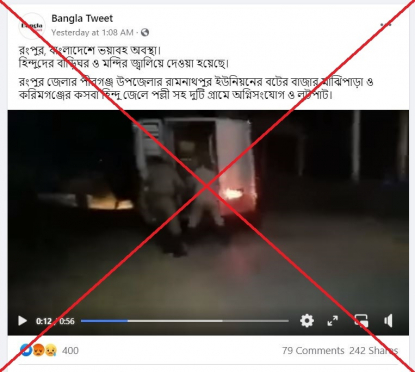 The post's Bengali-language caption translates to English as: “Dire situation in Bangladesh’s Rangpur. Hindu houses and temples were set on fire.”

The Dhaka Tribune reported on October 18 that a group of arsonists attacked Hindu homes in a village in Rangpur amid the recent sectarian violence.

The video was also shared here, here and here alongside a similar claim.

Bangladeshi television channel Somoy TV used the same footage in this report about the fire in Rangpur on October 17.

Some Indian websites here and here also used screengrabs from the video in reports on the Rangpur arson attacks.

AFP found the same video was published on October 13 in Facebook posts here and here that state it shows a fire on that day at a temple during the Hindu festival of Durga Puja, in the Dhalai district of Tripura, India.

Indian news outlet Time8 reported on the incident on October 14. The headline reads: “Puja pandal and four shops gutted in fire in Tripura.”

Below is another screenshot comparison of the misleading Facebook post (L) and the image (R) used by Time8 in its report:

The report used some of the same footage that was shared in the misleading posts.

At the video's one-second mark, it shows a banner from the scene of the fire in Tripura. 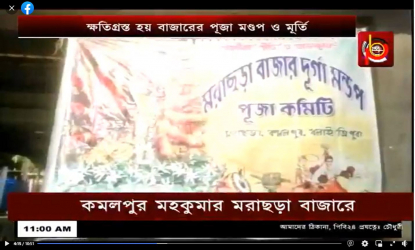