Facebook posts shared thousands of times purport to show a photo of a Hindu police officer who "shot and killed" three Muslims in Bangladesh as religious unrest erupted across parts of the country. The claim is false; the photo has circulated in reports from 2015 about a clash between rival ruling party groups. AFP found no reports of the incident described in posts.

"Hindu police officer Soumen Kumar Roy openly shot and killed a six-year-old child along with a Muslim couple," the Bengali-language post reads. "Below is the picture of Soumen Roy attacking with a shotgun."

Soumen Roy is a former Bangladesh police officer who allegedly killed his wife, stepson and a man in June.

The post surfaced online after an outbreak of violence in Bangladesh targeting religious minorities. 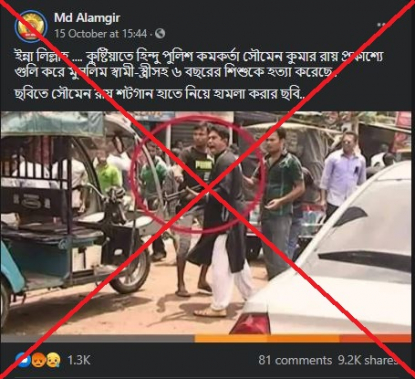 Screenshot of the false claim shared on Facebook, taken on October 19, 2021

The photo was shared in similar Facebook posts here and here.

AFP found no media reports of a Hindu police officer killing three Muslims during the recent spate of violence.

"This is not Soumen Roy. It’s a photo of the incident from a clash between two groups of Awami League after the 15-August procession in Kushtia in 2015," he told AFP.

A reverse image search on Google found the photo in a report from August 16, 2015 by Bangladeshi daily Prothom Alo.

The report said the man was unidentified.

Below is a screenshot comparison of misleading Facebook posts (left) and the Prothom Alo report (right). 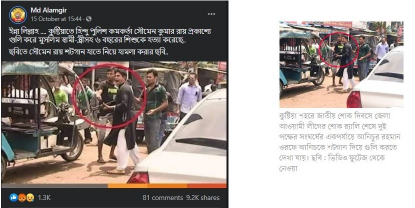 A later report published in 2018 identified the man in the photo as Anisur Rahman Anis, a follower of a then-local ruling party leader.

According to the report, Anisur Rahman was an officer in the Bangladesh police force.

The report states he joined the forces of a group of local Awami League in Kushtia after being stripped of his duty on allegations of involvement with embezzlement of drugs.