This video was taken in the Indian state of Rajasthan


A video has been viewed thousands of times in multiple Facebook and Twitter posts that claim it shows police officers travelling in a rickshaw that overturned in Uttar Pradesh -- India's most populous state -- after severe floods. The video, however, has been shared in a misleading context: the footage was captured in the state of Rajasthan.

The post criticises the state of the roads in Uttar Pradesh.

The post's Hindi-language caption translates in part as: "The UP police is doing stunts on the roads that have undergone #development by Chief Minister Yogi in Uttar Pradesh."

Yogi Adityanath is a Hindu monk and chief minister of Uttar Pradesh state. 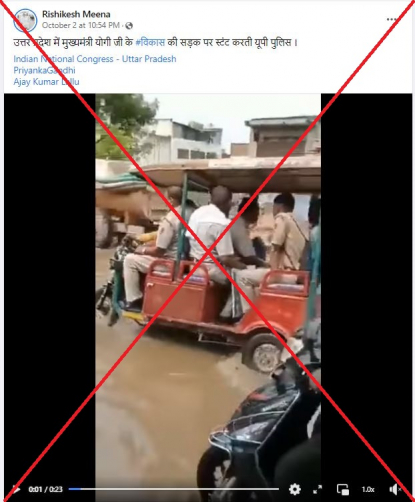 A Google reverse image search followed by keyword searches found the video was published on October 3, 2021, by the Uttar Pradesh police force's fact-checking team on Twitter.

The Hindi-language tweet reads: "This viral video is from Dausa district in Rajasthan, not Uttar Pradesh. Please don't spread rumours by posting misleading content without verification."

The tweet also shared a link to a news report published by Dainik Bhaskar, a Hindi-language news outlet, which describes the incident in Rajasthan's Dausa district.

It explains that the roads were flooded after heavy rainfall, causing the rickshaw carrying the police officers to overturn.

The video was also posted by local news outlet, Navbharat Times, on its YouTube page on October 2, 2021. The post states the incident happened in Rajasthan's Dausa district.

Below is a screenshot comparison of the video in the misleading posts (left) and the YouTube video (right): 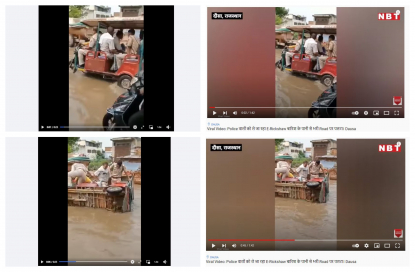