A photo of a man was shared in multiple Facebook posts claiming he was arrested for his alleged role in disrespecting the Koran at a religious event in Cumilla, a southern district of Bangladesh, on October 13, 2021. The claim is false: police said the man was wrongly identified online as a suspect in the case. He was in fact arrested over alleged vandalism at a temple in the southern district of Chattagram on October 11, a police spokesman told AFP. 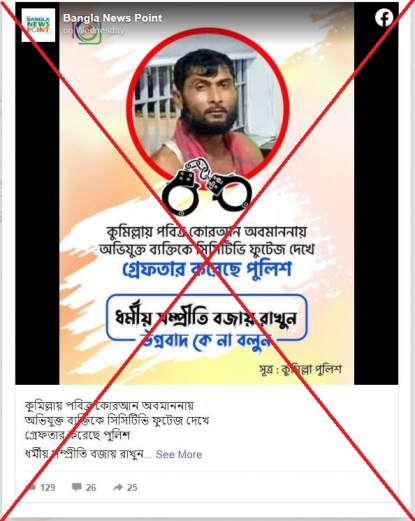 The post's Bengali-language caption translates to English as: "Police arrested the man accused of disrespecting the holy Koran in Cumilla after analysing CCTV footage".

Bangladesh witnessed a wave of violence targeting religious minorities after footage emerged on social media of a Koran being placed on the lap of an idol during a Hindu festival in Cumilla district on October 13.

The photo has been shared here, here, here and here on Facebook alongside a similar claim.

However, the man pictured in the misleading posts has been wrongly identified online as a suspect in the case, according to local police.

A combination of keyword and reverse image search found the photo was originally posted online on October 11, 2021 -- two days before the alleged incident in Cumilla.

On October 11, Chattagram Metropolitan Police posted photos of three men -- including the man pictured in the misleading posts -- in an update about a separate case in the southern district of Chattagram.

It reads: "Three accused were arrested and placed before the court for their involvement in vandalising a hand of a Durga idol by throwing pomelo on it at Sri Shmashaneshwari Shib Bigraha Temple in Shib Bari". 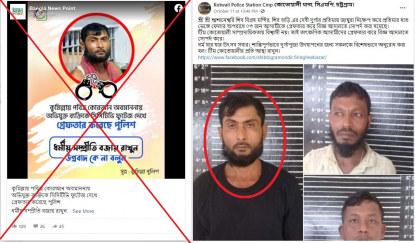 The arrests following the alleged vandalism at Chattagram temple were also reported here and here by mainstream media outlets.

Officer in-Charge of Kotwali police station Nezam Uddin told AFP that the man seen in the misleading posts was arrested along with two others for vandalism in a Chattagram temple.