A video has been viewed thousands of times in social media posts that claim it shows Spain's King Felipe VI shaking his head as a paratrooper crashed into a lamppost at a military parade on October 12. The posts are misleading; the video has been edited to combine two different clips that show the paratrooper's accident in October 2019 and the king shaking his head in response to an improper hoisting of the national flag in June 2019.

"A major disaster at an Armed Forces Day ceremony in Spain yesterday," reads a Korean-language Facebook post from October 14.

The video shows a paratrooper carrying a Spanish flag descending over a military parade. He tries to land but his parachute gets tangled in a lamppost. The clip then pans to Spain's King Felipe VI, who appears to shake his head in disapproval. 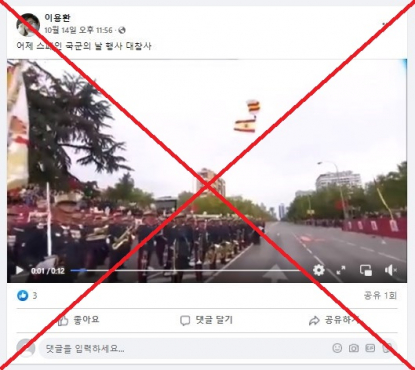 The same video has been shared on Facebook here, here and here, and on various platforms in South Koreahere and here, where it has been viewed more than 9,000 times.

However, the posts are misleading; the video is a compilation of two separate events from 2019.

The Spanish military officer crashed into the lamppost in front of hundreds of parade attendees, including King Felipe VI, according to this report from the BBC.

The accident, which was televised live across the country, was also documented by multiple news outlets across the globe, including here and here.

AFP could not find any reports that said the king expressed disapproval of the officer's accident. In fact, he and his family can be seen applauding the officer in spite of the mishap, as seen in this YouTube video of the military parade. 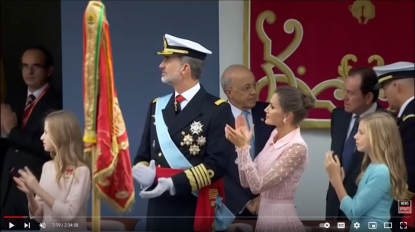 Screenshot of a YouTube video showing the king and his family applauding the paratrooper. Captured October 19, 2021.

The king and his family later personally offered words of comfort to the officer involved, local media reported here and here.

The clip of the king shaking his head was taken at a parade on June 1, 2019 in Seville, Spain to mark Armed Forces Day.

The Spanish national flag became partly detached from its mast as it was hoisted during the parade, prompting him to shake his head in visible disapproval, the HuffPost reported.

The king's response can be seen from the from 6:41-second mark in this clip posted on YouTube by Spanish newspaper El País on June 1, 2019. The video is titled "Parade on Armed Forces Day in Seville."

Below is a screenshot comparison of the king's expression in the video shared on Facebook (left) and a corresponding scene from El País' YouTube video of the parade (right).

Screenshot comparison of the king's expression in the video shared on Facebook (L) and a corresponding scene from El País' YouTube video of the parade (R).

A live stream of the 2021 edition of Spain's annual October 12 military parade shows the king wearing a face mask throughout the event.