This video shows a protest against vaccination requirements in Australia

A video has been viewed thousands of times in Facebook and Twitter posts that claim it shows a crowd of people chasing Indian Prime Minister Narendra Modi during a recent visit to the US. The claim is false: the video shows a protest against Covid-19 vaccination requirements in Australia.

The post's Hindi-language caption translates to English as: "I was also wondering that something was wrong. A five-day tour but he returned in three days. Never in American history has the Indian Prime Minister been chased away by a crowd of Mexican people.

"The American soldiers turned back and ran away with Modi. Long live America's unity with the farmers. You must watch the insult faced by Modi in America being chased off in front of farmers."

The footage shows a crowd of people chasing and attacking several police cars.

Police officers dressed in riot gear are then seen exiting their vehicles. 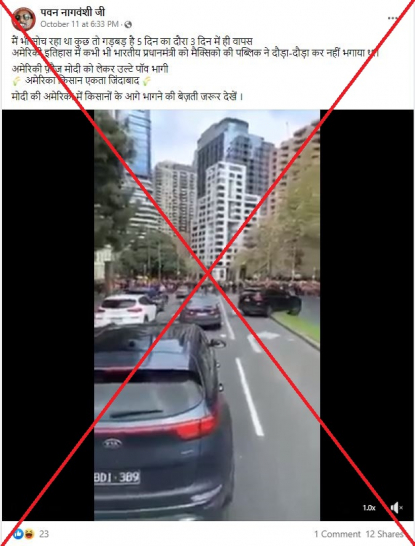 The misleading post was shared after Modi travelled to the US in late September 2021 for his first in-person meeting with US President Joe Biden.

The visit was reported to be scheduled for three days by Indian public broadcaster Prasar Bharati News Services.

The video has been shared alongside a similar claim on Facebook here, here and here; and on Twitter here and here.

Although there were reports of people gathering outside the White House to protest Modi's visit to the US, there was no mention of him being chased down by a mob.

A reverse image search on Google using the video's keyframes found it was shared in a tweet by Australian news outlet Nine News.

The group can be seen hurling objects and attempting to smash windows, forcing the Public Order Response Team to move in.

A corresponding news report published by Nine News explains the video was taken during protests in Melbourne in the Australian state of Victoria.

Below is a screenshot comparison of the video in the misleading post (L) and the video shared by Nine News (R): 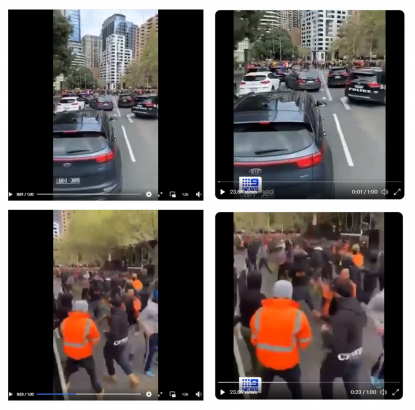 Construction sites were consequently shuttered after authorities described "non-compliance" to Covid-19 regulations and violent protests by the labourers.

The video was filmed here in Rathdowne Street: