This photo shows a US submarine in Japan in 2012

Social media posts purport to show a photo of an American nuclear-powered submarine that was damaged on October 2, 2021, in a collision with an object in the South China Sea. The claim is false; the photo was published in 2012 by the US Navy.

"It is said that this is the photo after the US submarine was hit," reads this October 10, 2021, tweet, written in simplied Chinese characters.

The tweet shows two photos of a submarine, with an orange arrow pointing to a purported dent. 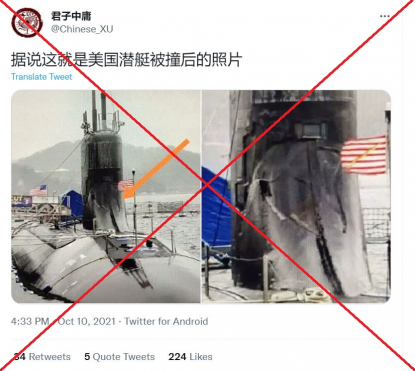 The same photo was shared with a similar claim here and here on Weibo.

The US Navy said that the USS Connecticut, a Seawolf class fast-attack submarine, had "struck an object while submerged" in international waters in the Indo-Pacific region on October 2, 2021. Eleven sailors were injured in the incident.

The US Navy regularly conducts operations in the South China Sea to challenge China's disputed territorial claims on small islands, reefs and outcrops.

A US Pacific Fleet spokesman also confirmed that the USS Connecticut (SSN-22) had suffered an underwater collision on October 2, 2021.

However, the photo circulating on social media was taken more than nine years before the collision.

A reverse image search on Google found the same photo was posted on Flickr by the US Pacific Fleet.

According to the photo caption, the picture was taken on March 9, 2012, in Japan.

Below is a screenshot comparison of the image in the misleading post (L) and the US Pacific Fleet's photo (R):

An online search based on the 2012 photo found no mention of the submarine being damaged.

The last known incident when a US submarine had a serious collision was in 2005, when the USS San Francisco (SSN-711) struck an undersea mountain, leaving one soldier dead, as reported here and here.

AFP found no photos of the submarine damaged in the October 2, 2021, collision.

The US Pacific Fleet published a statement on the incident on October 7, 2021, alongside several file photos.