The video was published here on Twitter on October 2.

It shows Lieutenant General John Frewen -- who was appointed to accelerate the nation's vaccine rollout -- speaking at a press conference.

"Australia is under military control. No government has a word of condemnation. Lieutenant General Frewen, the commander of Australia's #COVID-Force operation: "I will make sure everyone gets a dose of the vaccine before Christmas 2021," the Chinese-language tweet reads. 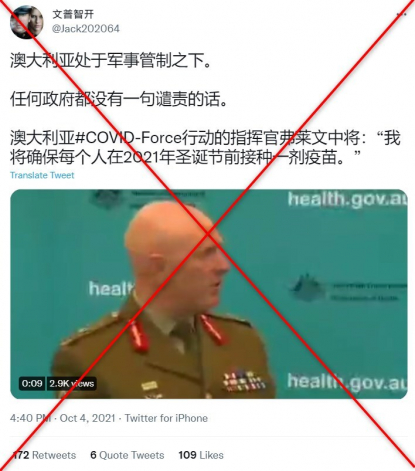 Screenshot of the misleading claim shared on Twitter, taken on October 18, 2021

According to General Frewen's Covid-19 combat strategy, Australia has the potential to reach 70% vaccination coverage by November and 80% by December.

Vaccination in Australia is voluntary, except for workers in certain sectors such as healthcare workers and aged care workers, according to the Australian Department of Health.

A keyword search on Google found the full version of the press conference streamed live here on YouTube by Australian broadcaster ABC News on August 4. The clip in the misleading posts corresponds to the livestream at the 11:08 mark.

Below is a screenshot comparison of the video in the misleading posts (left) and the ABC live stream on YouTube (right):

A screenshot comparison of the video in the misleading post and the ABC News live stream.

The transcript of the press conference was published here on the Australian Government Department of Health's website.

In the live stream, Frewen said all Australians would be offered at least one dose of a Covid-19 vaccine before Christmas. He did not say the vaccinations were mandatory.

"My first responsibility is to make sure that every Australian who wants to get a vaccine this year can do so and I'm still very confident that we can achieve that," he said at the 10:28 mark.

He also said the government had discussed financial incentives to encourage people to take the shot, although many were choosing to get vaccinated voluntarily because "what is resonating with people right now really is being able to get back to the sort of lifestyle we use to enjoy".