This photo of a mountain covered in solar panels was taken in China, not South Korea

A photo has been shared repeatedly in South Korea alongside a claim it shows a mountain in South Korea covered with solar panels. The posts circulated online after South Korean President Moon Jae-in announced his country would scale up its solar and wind energy production facilities in a bid to become carbon neutral by 2050. The claim, however, is false. The photograph shows solar panels at a power station in China.

The Korean-language text superimposed on the image reads: "South Korea's environment groups are dead. South Korea is rotting away. This is a mountain in a certain area in South Korea. All the trees have been cut down and solar panels cover the entire mountain, which signals that disaster will strike and [South Korea] will pay. This disaster is not natural. It is man-made." 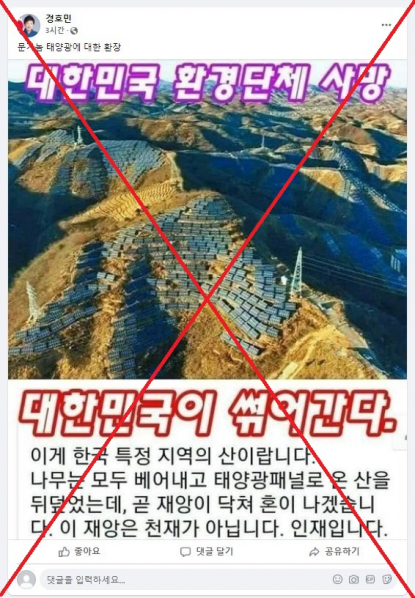 Screenshot of the misleading claim shared on Facebook. Captured October 14, 2021.

The post circulated online after Moon announced South Korea would scale up its solar and wind energy production facilities in a bid to become carbon neutral by 2050. AFP reported on the plans here.

Identical images and claims have been shared on Facebook here, here, here as well as on Naver Blog here.

The claim, however, is false: the image in fact shows a power station in China.

A Google reverse image search found the original image -- credited to Xinhua -- published on China.org.cn, a state-run news agency in China, on February 13, 2017: 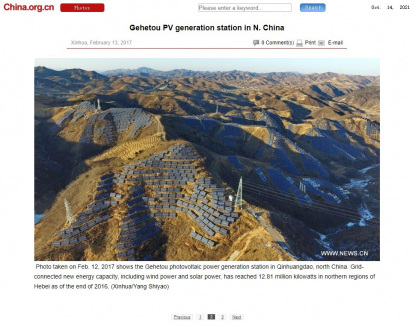 Screenshot of the original image published on China.org.cn. Captured October 14, 2021.

Identical photos of the Gehetou PV generation station were published on other Chinese state-run media sites -- including Xinhuanet, and the Global Times.

The same image was also published on the official website of the State Council, China's foremost administrative authority.

AFP geolocated the Gehetou PV generation station on Google Earth. The imagery corresponds with the mountainside scenery in the photo shared in the misleading posts.