A photo has been shared thousands of times in Facebook and Twitter posts that claim it shows the Indian army capturing Chinese soldiers in a face-off along India's border with China. The claim is false: the photo shows actors in a scene from an upcoming feature film.

The image was published here on Facebook on October 10.

The post claims the image shows Indian troops capturing Chinese soldiers in the northeastern Indian state of Arunachal Pradesh, frequently a site of conflict on the India-China border.

The post's Hindi-language caption translates to English as: "Breaking. Indian troops show their might upon infiltration by Chinese soldiers in Arunachal Pradesh. Indian soldiers captured about 150 Chinese soldiers for not returning to their border after repeated warnings!!" 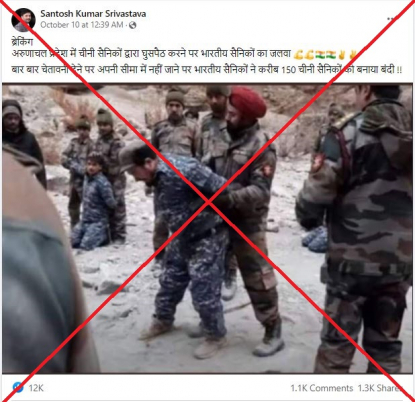 The post circulated online as Chinese and Indian senior military officials held high-level talks to ease tensions along a disputed Himalayan border between the nuclear-armed neighbours.

The talks ended without any progress, as reported by AFP.

The image was also shared thousands of times alongside a similar claim on Facebook here, here, and here; and on Twitter here and here.

A reverse image search on Google, combined with keyword searches, found the image corresponds to a longer video posted to YouTube on December 3, 2020.

The image can be seen at the video's five-minute 48-second mark.

The video's title reads: "lac movie Shooting in kargil Ladakh Behind the scenes".

Below is a screenshot comparison of the image shared in the misleading posts (L) and a still from the YouTube video (R):

Screenshot comparison of the image shared in the misleading posts (L) and a still from the YouTube video (R), taken October 14, 2021

According to the video's description, the clip is taken from an upcoming feature film titled L.A.C.

A description of the film was posted on online film database IMDb.

It reads: "When their commanding officer is killed by the Invading forces in a border standoff, two Indian soldiers must cross the Line of Actual Control unarmed, in order to save their battalion".

The IMDb page also shared stills from the film -- one shows an actor who resembles a man seen in the image shared in the misleading posts. He is identified on IMDb as Indian actor Vishal Om Prakash.

In a Facebook post published October 12, 2021, Om Prakash shared a screenshot of a fact-check report by India Today also debunking the misleading claims about his film:

In the post's caption, he identified himself as a soldier in the image, saying it showed his upcoming movie "LAC".