Skip to main content
A pregnant woman poses for photos with the Manhattan city skyline in the background at a park in Williamsburg, New York on April 20, 2021 ( AFP / Ed Jones)

Social media posts claim that prenatal ultrasounds can have severe effects on a developing fetus. But health experts and medical organizations say the procedure is safe and is an important tool to identify potential problems with a pregnancy.

"THE EXTREME RISKS OF PRENATAL ULTRASOUND," warns an October 13, 2021 Facebook post on The Transformed Wife page, which has more than 125,000 followers, saying the procedure has been linked to brain damage, speech delay, hearing loss, cancers and other problems in babies. 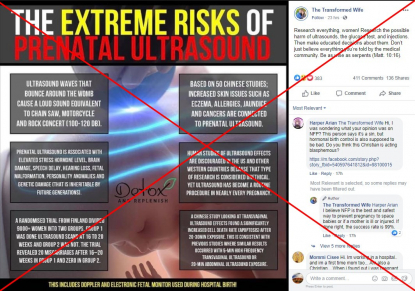 The Transformed Wife Instagram account, which has more than 25,000 followers, posted the same claim here, and it also appeared on the social media platform here.

A prenatal ultrasound is a procedure that allows physicians to see the shape and position of a fetus in utero. Experts regard the procedure as safe and an important diagnostic tool to determine the health of a fetus.

"There is no evidence that doing ultrasounds on babies in utero would cause any health risk to the baby," Leena Nathan an obstetrician-gynecologist at UCLA Medical Center, told AFP.

Among the post's claims is that the procedure creates a loud disruptive sound within the womb -- something Nathan said is not true.

"The ultrasound does not create a loud sound for the fetus in utero. This can be evidenced by the fact that a lot of times when we do an ultrasound the baby is actually sleeping or barely moving," she said.

The post references several studies but provides no links or citations, calling into question their validity and how they were interpreted.

Joshua Copel, professor of Obstetrics, Gynecology and Reproductive Sciences and assistant dean of clinical affairs at the Yale School of Medicine, said he is not familiar with any of the mentioned studies.

"Therefore, it's unclear whether they are invalid, misinterpreted or fabricated. In my professional opinion, these are made up allegations that are not based on any actual science," he said.

“Safety studies on ultrasounds are in no way discouraged in the United States and, currently, there is no evidence that ultrasound is harmful to a developing fetus," Copel added.

Nandini Raghuraman, a maternal-fetal medicine specialist, said the issues mentioned in the social media posts are extremely rare, and that there is no "good evidence directly linking them to ultrasound."

The posts claims that transvaginal ultrasound pose dangers. However, Raghuraman, an assistant professor at Washington University School of Medicine in St Louis, said that using a transvaginal probe "does not add any additional risk."

"In general, like all things in medicine, ultrasound should be reserved for when there is a clear need for it," she said.

Choosing not to have a prenatal ultrasound comes with its own set of risks. It could result in "missing fetal or placental abnormalities that may impact where or how the patient must be delivered to maximize safety for both the mother and baby," Raghuraman added.

The American College of Obstetrics and Gynecologists website says: "Currently, there is no evidence that ultrasound is harmful to a developing fetus. No links have been found between ultrasound and birth defects, childhood cancer, or developmental problems later in life."

It says that ultrasounds should only "be performed only for medical reasons by qualified health care professionals."

The Food and Drug Administration (FDA) also cautions against the use of ultrasound for non-medical purposes and said they should not be performed by non-medical staff, but also states on its website that "ultrasound imaging has been used for over 20 years and has an excellent safety record."

This is further confirmed by the American Institute of Ultrasound in Medicine, which said in a statement that ultrasounds have "known benefits and recognized efficacy for medical diagnosis, including use during human pregnancy."

Jacques Abramowicz a Clinical Professor of Obstetrics and Gynecology and expert in Ultrasound Services for Maternal-Fetal Medicine, said that "the real risk of ultrasound in prenatal medicine is not performing it."

"Ultrasound has allowed us to diagnose more birth defects now than we did in the past. Very often the ultrasound is performed because there is a reason to perform it," the University of Chicago Medicine professor said.