A video has been viewed thousands of times in Facebook and Twitter posts that claim it shows a man destroying a "vaccine passport machine" at an airport. But the posts are misleading; the clip was filmed before the pandemic and circulated in posts about a man destroying check-in machines in South Korea's Incheon airport.

"China smashed vaccine passport verification machine at the airport and got a lot of praise from foreigners on Twitter," reads the Chinese caption in a bilingual Facebook post from October 4, 2021.

The video shows a man in an airport pushing over a machine, as crowds look on. He then picks up a suitcase and hits it, before attacking a second machine.

The idea of vaccine passports -- where people must show proof of Covid-19 vaccination to take part in certain activities, such as international travel -- has sparked controversy, although it has been adopted by various countries, including Australia and Canada.

A screenshot of the misleading post taken on October 13, 2021

An identical video has also been viewed tens of thousands of times on Twitter here and here alongside a similar claim.

Some social media users appeared to believe reports that the man in the footage was smashing a "vaccine passport machine".

"Well smashed! He is a great man who saves lives!" one person commented.

"What he did is correct, but sadly most people will only be bystanders," another wrote.

However, the posts are misleading. The video predates the Covid-19 pandemic and has been shared in a misleading context.

The Naver Blog post reads: "Commotion at Incheon Airport!! Police should have come to stop him before he destroyed that many machines. It's relief to see he only harmed machines."

Below is a screenshot comparison of the video in misleading posts (left) and corresponding screenshots from the Naver Blog post (right). 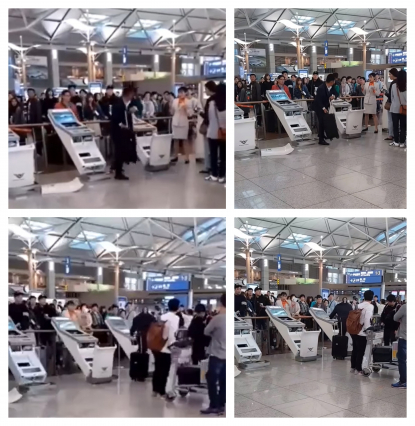 Further keyword searches on Google found a longer video of the same incident taken from a different angle posted here on YouTube on January 10, 2019.

The video's description states in part: "He broke five nearby self-check-in machines in about two minutes by kicking them or smashing them with a suitcase bag."

The man shouted: "South Korea will fall apart if things go on like this," at the 1:08 mark.

Below is a screenshot comparison of the video in misleading posts (left) and the YouTube video (right) with corresponding elements circled. 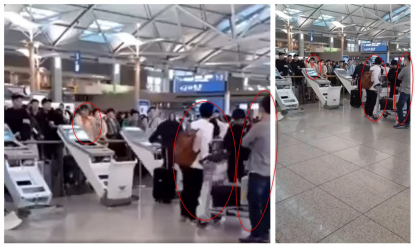 A screenshot comparison of the misleading video and the YouTube video with similarities circled in red by AFP.

AFP found a report on the incident by South Korean newspaper Kookmin Ilboon, which states that it happened on May 2, 2017.

"A drunk man in his 40s broke equipment at Incheon International Airport during the Golden Week holiday," the report reads.

"He shouted at the thousands of travellers who had gathered at the airport for the holidays: 'Korea is going to fall apart if we keep going like this.'"