This video shows a deadly car crash in Russia in 2014

A video of a burning vehicle has been viewed tens of thousands of times on Facebook, Twitter and YouTube alongside a claim that it shows the car crash that killed Swedish cartoonist Lars Vilks, who drew controversial cartoons of the Prophet Mohammed, in October 2021. The claim is false; the video has circulated in news reports about a deadly road accident in Russia in 2014.

The five-minute video was posted here on Facebook on October 5. 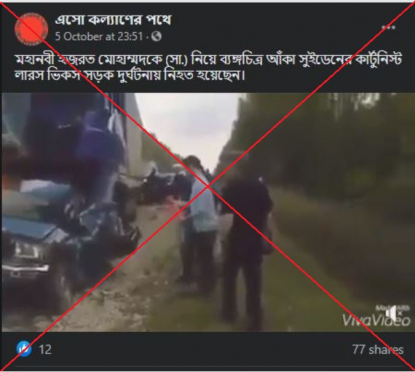 The Bengali-language caption of the post reads, "Swedish cartoonist Lars Vilks, who drew caricatures of the Prophet Mohammed (PBUH), has been killed in a road accident".

The 75-year-old cartoonist, who lived under police protection after his 2007 depiction of the Prophet Mohammed prompted death threats, was killed in a car crash on October 3.

A combination of reverse image and keyword searches found a longer clip was posted here on a YouTube channel called "Udmurtia emergency road and traffic accidents" on September 22, 2014.

Izhevsk and Mozhga are cities in the Udmurt Republic, or Udmurtia, in Russia.

The part of the video seen in misleading posts starts at the 2:03 mark.

Below is screenshot comparisons of the video in the misleading post (left) and from the 2014 YouTube video (right): 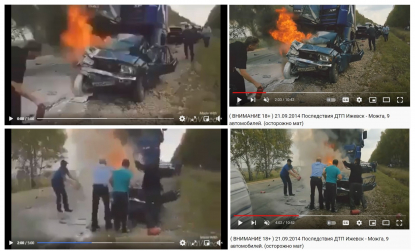 Local news portal Izhlife, based in Izhevsk, posted part of the video on YouTube on September 22, 2014.

The clip also appeared in this Izhlife article from September 25, 2014, headlined, "The wife of an Izhevsk resident who was burned in a car: the youngest daughter could have been with him".

"On September 21, a 39-year-old resident of Izhevsk, Sergei Knyazev, was burned alive in his car," the article reads. "His 'seven' was badly crumpled in an accident, the man was squeezed in the cabin. Eyewitnesses of the accident tried to save the man, extinguish the car fire, but failed."

The "seven" is the nickname given to the Russia-made Lada 2017 cars.

The video was also featured in reports about the accident by Russian broadcaster REN TV here and Russian news site Fontanka here.