This video shows an incident in Pakistan's Punjab province in 2018

A video has been viewed tens of thousands of times in multiple social media posts that claim it shows a police officer manhandling a couple in Pakistan. But the video has been shared in a misleading context: it has circulated in reports since 2018. Local police said the video shows an incident in 2018 for which an officer was "punished".

The video was shared in this tweet on October 5. It has been viewed more than 80,000 times.

The Urdu-language tweet reads: "On Sheikhupura Khalid Road, a young police lion picked up a husband and wife from their house. A woman joined her hands together in prayer and kept asking for help. The poor couple kept asking what their crime was".

"The police kept up their tyranny and later reportedly took 30,000 Pakistani rupees in bribes and let them go. There should be an investigation into what law allows picking up the accused in a private car".

The video appears to show a man standing next to a car, pushing someone inside the vehicle.

A woman can be heard shouting in Urdu: "What are you doing?" and "For God's sake, save them!" 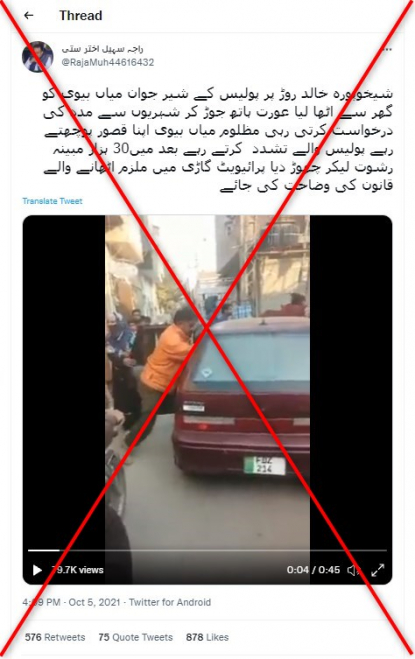 Screenshot of the false claim shared on Twitter, taken on October 8, 2021

Comments from some social media users indicated they thought the incident was recent.

"Request the police to investigate," one person commented.

"Will the IG [Inspector General] Punjab and RPO [Regional Police Office] Sheikhupura take notice of this sad incident," another wrote.

However, the clip has been shared in a misleading context.

Below is a screenshot comparing the video in the misleading posts (L) and the video posted in 2018 (R):

According to a tweet from the Punjab police posted under the video, the footage shows an incident in 2018.

"This is a 2018 incident in which departmental action was taken against the relevant accused officer and they have been punished", it reads.

The car license plate in the footage corresponds with the style of plates in Punjab province, as seen here.