The video shows computer-generated imagery and not a real plant


A video has been viewed thousands of times on Facebook and YouTube, along with a claim that it shows a plant called "Oodhu Pavaai" which purportedly releases pollen from trumpet-shaped tubes. The claim is false; it shows computer-generated imagery created by a visual artist, while plant experts said the species did not exist.

The video shared on Facebook on October 4 purports to show a plant that loudly blows out pollen from trumpet-shaped tubes.

The traditional Chinese-language posts reads: "Oodhu Pavaai, God's creation. / This plant is blowing out its pollen. / It's really amazing and interesting. / This plant called Oodhu Pavaai grows in the rainforests of southern India." 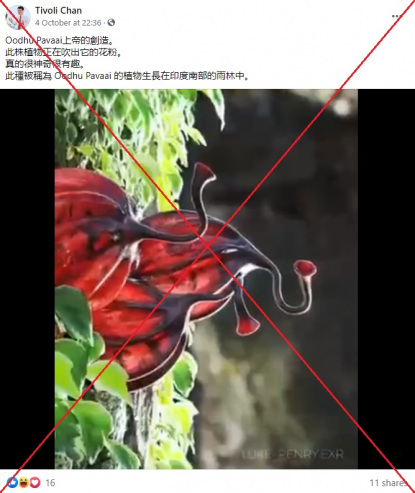 The video was also viewed more than 5,000 times on Facebook and YouTube alongside a similar claim here and here.

Some social media users appeared to believe the video showed a genuine plant.

"Seeing it for the first time! Beautiful plant!" another wrote.

However, the video has been shared in a misleading context. It shows computer-generated imagery of a plant species that does not exist.

A watermark on the bottom right side of the video reads: "LUKE_PENRY.EXR".

A keyword search found the same video uploaded on Instagram here on September 16 by an artist called Luke Penry, who describes himself as a "3D/Motion generalist".

Below is a screenshot comparison of the video shared in the misleading posts (left) and the video Penry uploaded on Instagram (right). 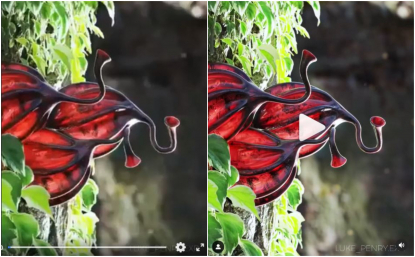 Penry's video was posted with the hashtags "motiongraphics" and "digitalart". Its caption states the sound had been created by another artist.

In response to another person's comment asking if the video shows a real plant, Penry wrote, "faaake".

Responding to another comment, he said he used "3ds max, redshift, tyflow" software to create the video.

In a separate tweet, Penry confirmed his video had been shared in a misleading context.

After uploading it to YouTube last week it went viral over WhatsApp for being a rare plant. Doctors and officials have been sharing it. It’s very funny!

Meanwhile, plant experts said the species in the video does not exist in real life.

"While this would be a very interesting fungus, I am afraid that such an organism could only be found in Star Wars or Avatar, and has no existence on this planet," Benoit Guenard, Associate Professor at the University of Hong Kong's School of Biological Sciences told AFP.

"Note that some fungus species can project their spores in a cloud as shown on the video (but no sound is produced that is perceptible by humans), but usually this is under the mechanical action of a different species triggering their release (for instance a human or ungulate stepping on it)."

Richard M.K. Saunders, a professor at the same institution, told AFP that the plant was a "fake".