Two photos of a "creepy" chair have been shared hundreds of times on Facebook alongside a claim it was created by a notorious American serial killer from actual human remains. But the claim is false. The photos show a chair that was created by an Australia-based special effects artist using latex.

The caption states: "This chair was made by the unfamous [sic] serial killer named 'Ed Gein'. He used different parts and skins of the human body together with human flesh to built [sic] this chair".

Ed Gein was an American serial killer who gained notoriety in the 1950s for making household items from dismembered body parts. 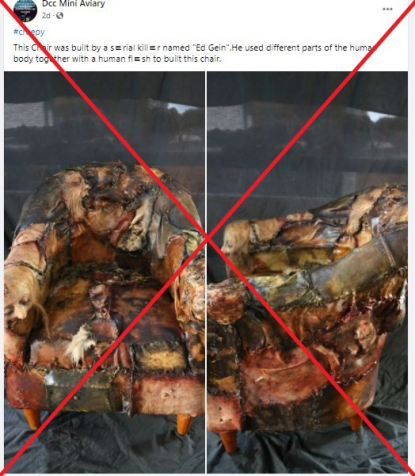 A screenshot of the misleading post taken on October 5, 2021

Identical photos were also shared alongside a similar claim on Facebook here, here and here.

Comments on the posts indicated some social media users believed the chair was actually made from human remains.

"I can see the faces on the chair," one wrote.

The claim is false: the photos show a chair created by a special effects artist.

Reverse and keyword searches found the photos correspond with images of an "Ed Gein inspired chair".

The chair was advertised for sale on a website for Butterfly Fx Studios, owned by Brisbane-based special effects artist Kayla Arena.

A portion of the advert reads: "This custom-made chair is covered in latex skins and faces, hand-sewn together. The latex is then painted and sealed with silicone to ensure longer life of latex and is very easy to wipe clean. Some of the faces feature crepe hair and synthetic eyelashes, please see pictures".

Arena posted the image of the chair on her Facebook page in 2016.

She told AFP that photos of her creation had been shared in misleading online posts.

"I made this chair. It's been shared worldwide by many people so it's gotten out of hand,” she told AFP. "A lot of my works people try to "clickbait" as if they have been actually made by a serial killer!"

AFP previously debunked posts that claim a leather jacket she created was made of actual human skin.