Skip to main content
A person walks across a bridge on the Cowessess First Nation in Saskatchewan as the sun sets over Crooked Lake on June 27, 2021 ( AFP / Geoff Robins)

A video shared on social media claims that martial law will be imposed in Canada in October 2021. This is false; the document cited as evidence is an emergency order aimed at curbing the Covid-19 pandemic in the province of Saskatchewan, and does not authorize a military deployment.

"EMERGENCY ALERT SHARE TO EVERYONE CANADA TO ENFORCE MARTIAL LAW," says text at the start of an October 1, 2021 Bitchute video that has been viewed more than 159,000 times. 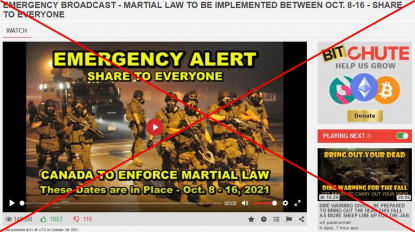 Screenshot of a BitChute video taken on October 5, 2021

The text is shown at the beginning of a video of two people -- who do not appear to be Canadian legal experts -- discussing a September 13 order signed by Saskatchewan's premier and claiming that it will permit action by the military.

But the order makes no mention of the military, and a spokesperson for the provincial Ministry of Justice and Attorney General told AFP that the claim is false.

"The Government of Saskatchewan will not implement martial law, and will not invoke any emergency powers beyond what is required to manage the spread of Covid-19 and ensure the stability of our healthcare system," the spokesperson said.

A Saskatchewan opposition party called for the provincial government to request help from the Canadian military as Covid-19 hospitalizations surged. But Premier Scott Moe rejected the idea and said the province was seeking federal assistance in other areas, including expedited approval for rapid tests.

According to a September 13 government statement, Moe signed "a new Provincial Emergency Order to once again provide for health system labor mobility through greater flexibility in scheduling and redirecting health care workers to areas experiencing capacity pressures and in the use of supplementary resources."

The province's Emergency Planning Act "and the powers it provides in an emergency have existed long before the pandemic, and are similar to emergency planning legislation in other provinces. The Minister's Order merely sets out the Government's ability to use those powers (page one) and what actions are being taken under that authority (page two)," the spokesperson said.

The order allowed the province to renew an agreement it had in place with various health sector organizations that had expired over the summer -- something confirmed by a statement found on the Saskatchewan Union of Nurses' website, one of the signatories.

A Letter of Understanding had been signed in April 2020 between the Saskatchewan Health Authority and healthcare unions but it expired after the provincial government briefly removed the State of Emergency on July. The order reinstated it.

Mention of the Letter of Understanding can be found on page 2 of the order: 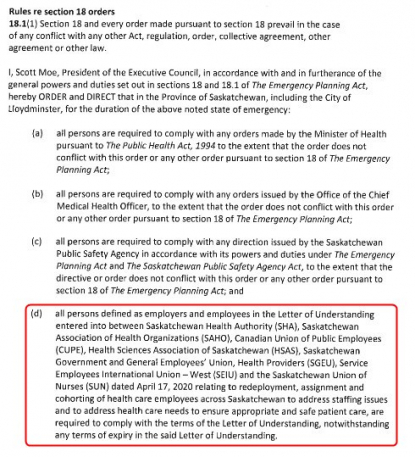 Screenshot of a document taken on sun-nurses.sk.ca on October 5, 2021