Billboard doctored to suggest Leni Robredo's hometown 'ashamed' of her

A photo doing the rounds on Facebook and Twitter in the Philippines appears to show a billboard with a message that people in the hometown of Vice President Leni Robredo are "ashamed" of her. The picture was shared as speculation grew around her potential run in the 2022 presidential election. In fact, the text in the photo has been digitally altered. The original image shows a billboard honouring Robredo's late husband.

The photo was shared here on Facebook on September 28.

It appears to show people posing in front of a billboard that reads, "We are from Bicol and we are ashamed of Leni" in Tagalog.

Bicol is a region in the Philippines from which Robredo hails. 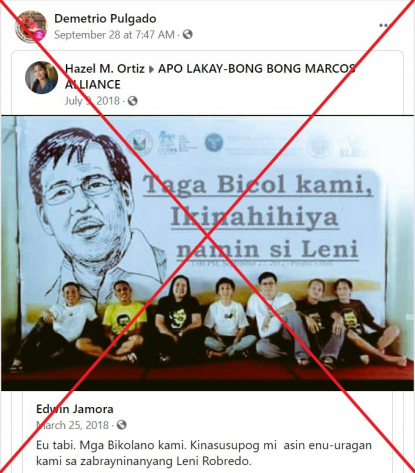 A screenshot of the misleading post taken on October 3, 2021

The photo circulated online following speculation about Robredo's potential candidacy in the 2022 presidential election. It was shared on Facebook, including here and here, and on Twitter here and here.

The picture was first shared online in June 2016 after she became vice president.

Robredo is controversial for being a vocal critic of President Rodrigo Duterte and his deadly crackdown on drugs.

"See, Leni? Even people from Bicol are disowning you!" one person wrote.

"These people made the right decision!" another commented.

However, the photo has been doctored. The original image shows a billboard with text honouring Robredo's late husband.

Keyword searches found the original image featured in this video posted on Robredo's Facebook page in 2018.

Speaking in the video, Robredo says the photo was "badly edited" from an image taken by non-profit group Physicians for Peace.

"The [original] photo was from Physicians for Peace," she says in Tagalog. "I remember they just took that photo in honour of my husband. I remember they conducted a medical mission back then in Naga".

Contacted by AFP, a spokesperson for Physicians for Peace said the photo was "altered".

The original photo shows a 2012 medical mission in Naga City, where Robredo’s husband served as mayor for almost two decades.

Below is a screenshot comparison of the altered image (left) and the original photo sent to AFP by Physicians for Peace (right).

The text on the original billboard reads: "Physicians for Peace celebrates Jesse’s life with PWDs".

Keyword searches also found this photo of the same banner shared by the Physicians for Peace Facebook page in 2014.