Skip to main content
A woman gestures as she uses her phone in Seoul on August 18, 2021. ( AFP / Anthony WALLACE)

The photo was shared on South Korean blogging platform Naver Blog on September 27, 2021.

It shows a what appears to be a funeral home truck. Text on the vehicle reads: "Don't get vaccinated / Wilmore Funeral Home / WilmoreFuneralHome.com".

Korean-language text overlaid on the photo translates to English as: "Funeral home advertisement. Don't get a Covid-19 vaccine". 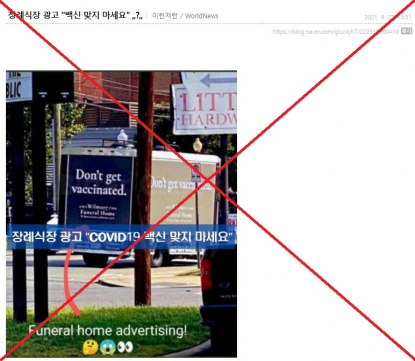 A screenshot of the misleading Naver Blog post, taken on October 1, 2021. ( AFP)

An identical photo was also shared on Facebook and on the South Korean online forum Client.

Comments on the posts indicate some social media users were misled into believing the image shows a genuine funeral home truck.

"Korean funeral home companies also can use this," one wrote.

A combination of a Google reverse image and keyword searches found it corresponds to an earlier photo shared on Twitter on September 21.

The earlier photo was posted by the US-based advertising agency BooneOakley. Its caption states: "It was us. Get vaccinated".

Below is a screenshot comparison of the photo in the misleading Naver Blog post (L) and the corresponding photo shared by BooneOakley (R):

A representative for BooneOakley confirmed its advert was intended to promote vaccination -- not discourage it as the misleading posts allege.

"We decided to do this since everything you see promoting the vaccine is very straight-forward," the representative told AFP on September 30, 2021

"The message "Get vaccinated" doesn't seem to be working so we felt like it was time to try something different".

The website "WilmoreFuneralHome.com" does not correspond to a genuine funeral home.

The website's homepage reads: "Wilmore Funeral Home / Get Vaccinated now. If not, see you soon".

Below is a screenshot of the page: 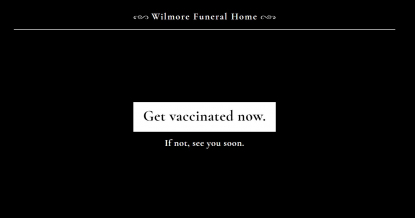 The advertising stunt was covered by multiple media organisations including CNN, The Independent, and USA Today.