Photo does not show a young Louis Armstrong

Social media posts shared thousands of times feature a photo of a young boy, suggesting it shows American jazz icon Louis Armstrong as a child. But the US Library of Congress website says the image was taken in the 1930s, when Armstrong was already an adult.

"The Karnofsky Jewish family, who immigrated to the United States from Lithuania, employed a 7-year-old boy and adopted (so to speak) him into their home," says a September 23, 2021 Facebook post that included a picture of a smiling Black child wearing overalls.

"In memory of this family and for the rest of his life, he carried the Star of David... This little boy was called Louis Armstrong," the post says. 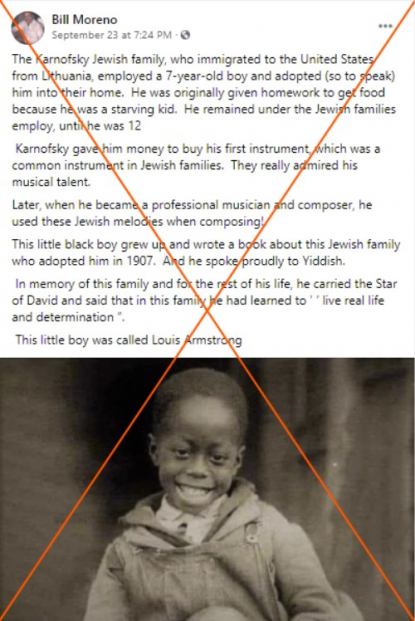 The claim also appeared on Facebook here and here and on Instagram here. While Armstrong did have a connection with the Karnofsky family, the photo in the posts is not of him.

A Google reverse image search for the picture led to this page on the US Library of Congress website, which includes the same photo, titled: "African American boy holding a piece of fruit received through the Red Cross drought relief work in Mississippi."

The Library of Congress says the image dates to 1930 or 1931 and was taken by photographer Lewis Wickes Hine. 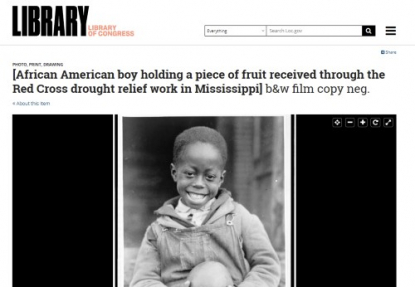 Screenshot of a US Library of Congress webpage taken on September 29, 2021

Born August 4, 1901, Armstrong would have been in his late twenties or early thirties the year the photograph was taken.

According to the Louis Armstrong House Museum, the Karnofskys were a family of Russian Jewish immigrants who hired him in 1907 and loaned him the money to buy his first cornet, an instrument similar to a trumpet.

Armstrong died in his sleep on July 6, 1971 with dozens of hits to his name.