A video has been viewed millions of times in Bengali-language posts on Facebook in 2021 alongside a claim it shows a student who died after being beaten by a school headmaster. The claim is false: the video has circulated in reports since 2019 about a group of students who fell ill at a school in Bangladesh after a cleanup operation. The school told AFP that none of the students died after the incident.

The video was shared here on Facebook on September 27, 2021.

The post's Bengali-language caption translates to English in part as: "School student dies of caning by headmaster. This hasn't gone viral. It would have gone viral if the Alims [Islamic clerics] did anything like this." 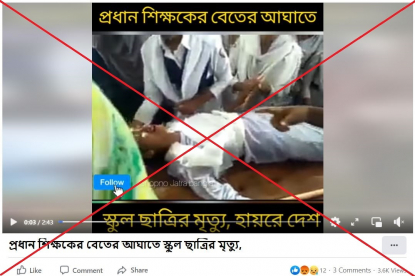 A screenshot of the misleading post taken on September 29, 2021

The same video has circulated on Facebook with a similar claim since at least April here, here and here. It was viewed more than 2.8 million times.

One post -- published here on Facebook on September 19, 2019 -- includes the caption: "Hundreds of schoolchildren fell sick on Wednesday while clearing long-grown grass on the grounds of Dargram High School in Saturia upazila of Manikganj.

"Seriously ill students have been admitted to the Upazila Health Complex.’"

Manikganj is a district in central Bangladesh near the capital Dhaka.

Below is a screenshot comparison of the video in the misleading posts (L) and the video from the 2019 Facebook post (R):

A report published by The Daily Jugantor on September 18, 2019 states: "More than a hundred students fall unconscious while they were clearing long-grown grasses in the school yard at the instruction of the headmaster at Dargram High School in Saturia upazila of Manikganj district.''

The report -- and other news reports here and here -- do not state any of the students died.

Siddiquel Islam, headmaster of Dargram High School, told AFP the video has been shared in a false context.

He said on September 29: "This incident happened in our school in 2019. Some students fell sick but all of them recovered immediately after brief treatment in hospital. None was beaten or died. These are false claims."

The building seen in the video corresponds to photos of Dargram High School posted on this Facebook page.