Skip to main content
A doctor administers a Covid-19 vaccine in Ontario, Canada on May 15, 2021 ( AFP / Cole Burston)

No evidence Canada teen was hospitalized after Covid-19 shot

A video circulating online shows a woman claiming that a teenager in Halifax, Canada, was hospitalized due to cardiac arrest after receiving a Covid-19 shot. But the Nova Scotia Department of Health described the claim as "misinformation" and said there is no evidence the incident occurred.

"Vaccine Caused 13 Year Old’s Heart To Stop After Jab, Mother In Halifax Claims," says the headline of a September 24, 2021 online article that included the video of the woman.

"My daughter just contacted me from school, very upset, that one of her friends is now in critical care in the hospital here in Halifax because her heart stopped right after she had a vaccine," a woman says in the clip. 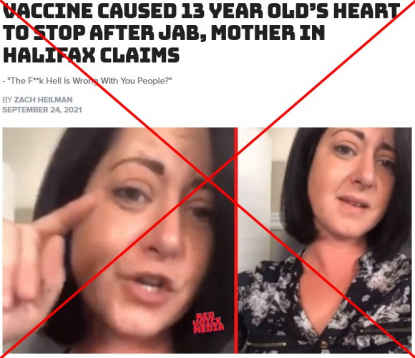 Screenshot taken on September 28, 2021 shows an article on redvoicemedia.com

The same video spread on other sites, including here and here.

"To date, there has been no report to Public Health, EHS or IWK about this incident," a spokeswoman for the Nova Scotia Department of Health told AFP, referring to Emergency Health Services and a pediatric hospital.

"Misinformation like this can be very harmful and is very concerning to all of us," she added.

Nova Scotia's chief medical officer of health, Dr. Robert Strang, also dismissed the claims made in the video in a September 24 CBC interview.

"There's nothing at all to suggest that this is actually an event that actually occurred," said Strang, who also described the video as "misinformation."