Skip to main content
Pro-monarchy activists hold portraits of late Thai king Bhumibol Adulyadej during a rally in support of the royal institution in Bangkok on March 6, 2021. ( AFP / )

A video has been shared repeatedly in Facebook and Twitter posts that claim it shows the United Nations declared December 5 as "international king's day" in honour of Thailand's former monarch Bhumibol Adulyadej. The claim is false. The video in fact shows Peter Thomson -- the then president of the UN General Assembly -- saying December 5 was designated "World Soil Day" in recognition of Bhumibol's environmental programmes.

The post's Thai-language caption translates to English as: "The UN has marked December 5 (father's day in Thailand) as international king's day. This is the greatest news". 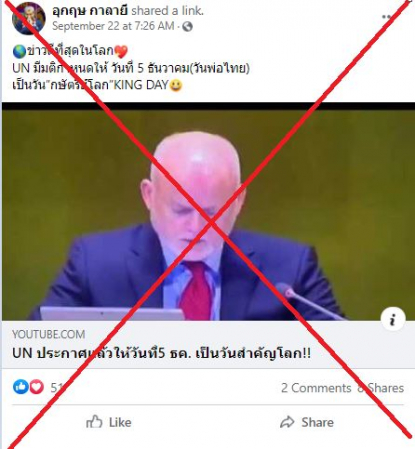 December 5 is the birthday of Thailand's late king Bhumibol Adulyadej. The date was designated the country's national father's day in his honour.

Bhumibol died in 2016 after reigning for seven decades.

The same video was also shared here and here on Facebook; and here on Twitter alongside a similar claim.

Keyword searches found the video in the false posts corresponds to a portion of a news report published on October 30, 2016.

Nowhere in the report did the UN announce the creation of an "international king's day" as the posts claim.

In fact, the report shows Peter Thomson -- then president of the UN General Assembly -- saying the late Thai king's birthday was named "World Soil Day" in tribute to him.

"Under the king's leadership, Thailand raised global awareness of the importance of soil as a  resource of poverty reduction, climate change adaptation, sustainable development and security," Thomson says at the report's three-minute 13-second mark.

"In 2013, the General Assembly recognised his efforts by designating the 5th of December -- the same date as the king's birthday -- as World Soil Day".

Below is a screenshot comparison of the video in the false posts (L) and the report aired by NBT World (R):

UPDATE: This report was updated on October 1, 2021 to remove a comment from the United Nations' office in Thailand.