Walt Disney's body was not frozen, won't be revived


An article shared across social media claims that Walt Disney's body was cryogenically preserved when he died in December 1966 and that an effort would be made to revive him around the upcoming anniversary of his passing. But the story was published on a website that says it is "satirical," and the claim is false according to the Walt Disney Family Museum, created by the family of the Mickey Mouse creator and entertainment legend, and the Cryonics Institute mentioned in the article.

"55 Years After His Death, Walt Disney's Frozen Body Will Be Thawed December 2021 In An Attempt To Bring Him Back To Life," says a September 15, 2021 article from the website Daily News Reported. 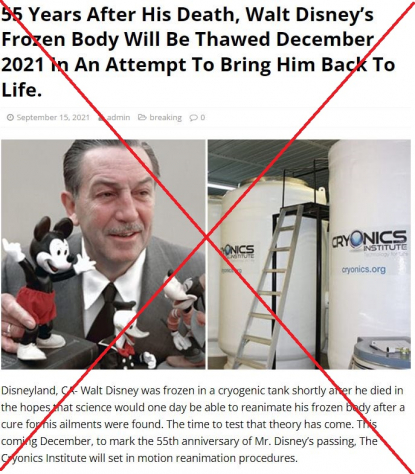 A screenshot taken on September 27, 2021 of a satirical website article claiming Walt Disney's frozen body would be reanimated

The article was shared more than 11,000 times on Facebook according to the social media monitoring tool CrowdTangle. It was also shared on Twitter here and here, and a screenshot of the article circulated on Instagram.

The article claimed that the Cryonics Institute was preparing "reanimation procedures" for Disney to coincide with the 55th anniversary of his death. "Not only did Walt hope for a cure, but he was also obsessed with what the world would be like in the future," said the unsourced story.

But the "About Us" page of the Daily News Reported carries a disclaimer that is it "a fabricated satirical newspaper and comedy website" which "uses invented names in all its stories, except in cases when public figures are being satirized." The site's masthead also alludes to the tenor of its content, noting that it is "not quite daily" and "not quite news."

Some social media users, however, appeared to believe that the story was true.

"WOW! If Walt Disney wakes up and they're successful in bringing him back decades after his death, history will be made," one Facebook user wrote in reposting the story.

Caroline Quinn, communications director for the Walt Disney Family Museum, said this was one of a number of "wildly false" rumors about Walt Disney's death.

"I can confirm that Walt passed away on December 15, 1966 from acute circulatory lung collapse at St. Joseph's Hospital in Burbank, California," she said in an emailed statement.

"Two days later, Walt was cremated and interred at Forest Lawn Memorial Park in Glendale, California. As his death was so sudden following the very recent discovery of a golf ball-sized tumor on his left lung, there would have been little time for Walt to consider or discuss the end of his life with others."

Quinn said that until the day before he died, Walt Disney "was still devoting much of his time and energy to the planning of Walt Disney World in Orlando, Florida from his hospital bed."

Cryonics Institute president Dennis Kowalski said his organization could not disclose the names of individuals choosing to have their bodies frozen at the time of death in the hope of reanimation. But he stated in an email: "The Cryonics Institute is not bringing Walt Disney back to life soon.

"We have heard of this rumor and similar versions as well and we can confirm that it is not true.

"Even by our optimistic estimates it will be a long time.. perhaps 100 years or more before we are able to revive patients preserved at cryogenic temperatures."