The post's caption states that 18 Muslim women died after a boat capsized in Mymensingh, a district in northern Bangladesh.

It translates to English as: "In Mymensingh, 18 sisters have memorized the Qur'an. After finishing Hifz, today, on 22nd September, everyone left for a boat trip. On their way back, their boat sank, killing 18 people.

"May Allah grant the beloved sisters the high status of Paradise with the status of martyrs".

"Hifz" is the practice of memorising the Koran.

The post -- which has been shared more than 700 times -- includes one photo of men appearing to dig graves. 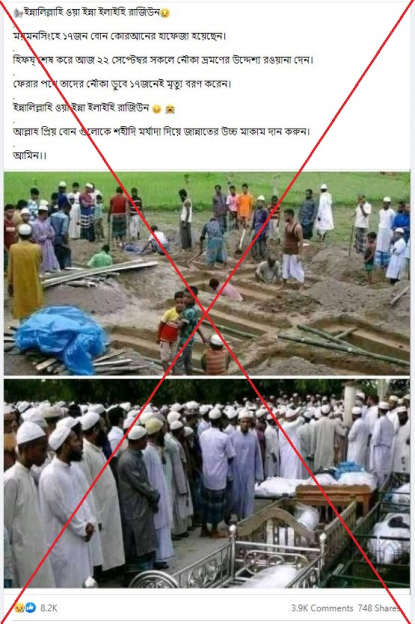 Screenshot of the misleading claim shared on Facebook, taken on September 27, 2021

The photos were shared in Facebook posts here and here alongside a similar claim.

Reverse image searches on Google found the photos featured in a report from August 6, 2020 by the Bangla Tribune.

The headline reads: "Funeral of the victims in boat accident in Madan completed".

At least 17 people died after a boat capsized in the northern district of Netrokona.

Most of the victims were students and teachers of a local madrasah, an Islamic seminary.

AFP found no credible news reports about a boat accident in Mymensingh on September 22, 2021.