A video has been viewed tens of thousands of times in social media posts that claim it shows actual footage of a Philippine police officer slapping people in the street for failing to follow Covid mask rules. The claim is false. The video shows a sketch created by a Philippine production studio that has a history of publishing provocative content.

The video has been viewed more than 75,000 times after it was published here on Weibo on September 16.

The video shows a woman approaching people in the street before slapping and scolding them.

"You are so stubborn! Where's your facemask?" she says in Tagalog. "Covid is spreading because of people like you!" 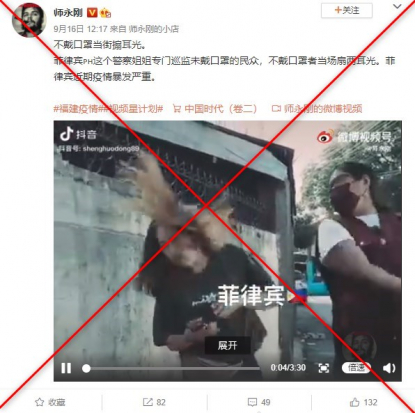 The same video was shared alongside a similar claim on the Chinese version of TikTok Douyin here and here.

The claim is false: the video shows a sketch and not an actual footage of police assault.

A reverse image search on Google found the same video was posted here on Facebook on September 13 by VinCentiments, which describes itself as a "Movie/Television Studio".

The Facebook video's caption states it is the first episode of a series called "Village Chief".

The second and third episodes of the series were also published on the VinCentiments Facebook page.

Below is a screenshot comparison of the video in the misleading posts (left) and the Facebook video (right).

The VinCentiments Facebook page has previously shared similar episodic video sketches on topics such as sex and drugs.

The production studio drew criticism in June for a purported digital series that tackled the subject of incest, as reported by local media Interaksyon.

AFP contacted VinCentiments but has not received a reply.